Submitted by VFP members Bruce Gagnon (Maine), Will Griffin (San Diego), and Ken Jones (Asheville) who are going to South Korea next week and would like to release this to media while there.


Veterans for Peace, a global organization of military veterans and allies, opposes the recent decision of the U.S. and South Korean governments to deploy the Terminal High Altitude Area Defense (THAAD) missile defense system in South Korea.  We stand in solidarity with the people of Seongju in North Gyeongsang Province in their courageous fight to oppose the deployment of the THAAD system in their hometown. 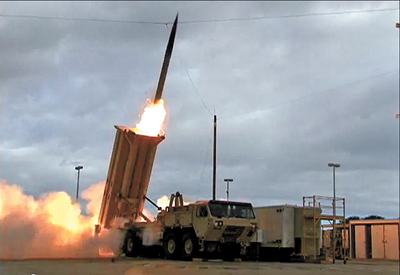 The U.S. and South Korean governments justify their decision by pointing to the so-called North Korean missile threat.  But THAAD is not for the defense of South Korea.  Its aim is to neutralize Chinese missile capability and protect U.S. military assets in the region.  The U.S. Congressional Research Service stated, as early as in 2013, that THAAD, if deployed in South Korea, would be ineffective in intercepting North Korean incoming missiles flying on a low trajectory.  And as Theodore Postol (MIT), former advisor to the U.S. Chief of Naval Operations has noted, THAAD is designed to track Chinese intercontinental ballistic missiles (ICBM).

Yet it is the people of South Korea, who will pay the highest price for a missile defense system that is ultimately useless in their defense.  Seongju residents are justified in their concern about the potential impact of the THAAD system's AN/TPY-2 radar on their health and environment.  In Kyoto Japan, which houses the U.S. X-band radar, local residents complain of unendurable headaches and insomnia due to exposure to the continuous low-frequency noise caused by the radar's engines running 24 hours a day.  Long-term exposure to high frequency electromagnetic waves emitted by the THAAD radar and noise caused by its engines may cause similar health issues in Seongju, where 20,000 residents, mostly melon farmers, live within 2 kilometers of the designated site.  The decision to deploy THAAD in South Korea was undemocratic with no input from South Korean citizens, who will inevitably be burdened with the biggest share of the bill for operating the costly weapon system, estimated at $1.5 billion.

THAAD deployment in Korea is also a key component of the U.S. military's new operation plan and first-strike strategy vis a vis North Korea.  What the U.S. media does not show - hence few U.S. citizens know - is that the U.S. military, which has had its troops in South Korea for the past 65 years, regularly conducts massive war games that simulate the use of strategic nuclear weapons and the collapse of the North Korean regime.  The new ‘Operation Plan 5015’ calls for preventive strikes on North Korea's core military facilities to take out its nuclear capability. Clearly, U.S. deployment of the THAAD system in South Korea is a provocative move against North Korea, China and Russia that will redraw Cold War lines and escalate tensions in a region that is already heavily militarized with weapons of mass destruction.

The people of the United States are tired of paying for endless U.S. wars that dehumanize entire nations and create a culture of violence around the world, as well as costly weapon systems that wreak senseless destruction and drain precious resources away from critical human needs.  The burden of producing and operating the THAAD system will ultimately be borne by U.S. and South Korean taxpayers.  At a time when people's lives are increasingly burdened with chronic unemployment, lack of healthcare access and diminishing social services, this is unacceptable.  U.S. reliance on endless wars to preserve its economy and maintain its hegemonic grip on the rest of the world is unsustainable and unsupported by its people.

Veterans for Peace stands in solidarity with the residents of Seongju, South Korea and is resolute in its opposition to THAAD deployment in Korea.  U.S. missile defense is the greatest obstacle to global nuclear disarmament.  We call on the U.S. government to change course from perpetuating endless wars and producing and proliferating weapons of mass destruction and refocus its resources to solving pressing needs that face our world today, such as creating a sustainable economy and fighting climate change.  We call on the U.S. government to rescind its decision on THAAD deployment, abolish missile defense, stop provocative war games, and finally bring the 65-year old Korean War to an end to ensure peace and security in Northeast Asia.