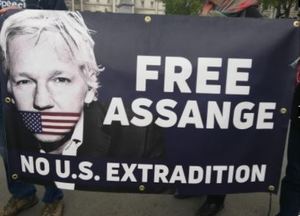 Imprisoned journalist Julian Assange faces life behind bars for telling the truth about U.S. war crimes in Iraq, Afghanistan and at the U.S. torture base in Guantanamo Bay. The party that committed those crimes continues to vindictively and relentlessly pursue him more than a decade later. Currently, Assange is being held in brutal isolation at Belmarsh prison in the United Kingdom on behalf of the United States.

Assange, the founder of the WikiLeaks Internet news outlet, faces U.S. extradition on charges under the 1917 U.S. Espionage Act. Yet, Assange is not an American citizen, nor was he on American soil when he published the classified documents in question. Assange worked with traditional news outlets to redact the documents and publish the documents responsibly. These files were voluntarily sent to WikiLeaks by Chelsea Manning, a U.S. Army Intelligence Analyst stationed in Iraq at the time–a fact that Manning described in detail during her military trial.

Manning was eventually granted clemency by President Obama in 2017, following years of advocacy by Veterans For Peace and other supporters. During that time, the Obama administration recognized that prosecuting Assange would create a "NY Times problem", based on unmistakable similarities to the publication of the Pentagon Papers. Inexplicably, the Biden administration has continued in former-President Trump's footsteps in targeting Assange.

As military veterans from WWII to the current era of conflicts, who have trained for, and in many cases, fought in U.S. wars–often in the name of democratic values such as freedom of the press, free speech, and free journalists–we demand that our own government respect those principles now.

Veterans For Peace calls upon the Biden Administration, specifically Attorney General Merrick Garland and the US Department of Justice, to drop all charges against journalist Julian Assange and ensure his immediate release and freedom.

Suggestions for VFP organizers and activists interested in advocacy on this topic: