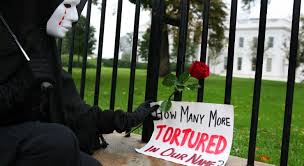 Veterans For Peace strongly condemns and denounces the pro-torture rhetoric being used in the 2016 presidential campaign. Recent statements by several presidential candidates, most notably Donald Trump, but also Ted Cruz, Marco Rubio and others, have advocated the use of waterboarding and other torture techniques, euphemistically-dubbed “enhanced interrogation,” or have failed to rule out torture in the interrogation of terror suspects. In doing so, these candidates have effectively admitted they would violate U.S. and international law should they win the presidency.

Since the revelations of the CIA torture program came to light, numerous legal, military, medical and other experts have testified that torture does not work – that it is more likely to produce false testimony than valuable information and causes severe trauma to those who administer it. John Kiriakou, CIA anti-torture whistleblower, recently wrote that “torture may have made some of us feel better in the aftermath of the September 11 attacks. It may have made us feel that we were avenging our fallen compatriots who were killed that day. But there was no information gathered through torture that saved American lives.”

The Geneva Conventions of 1949 and additional protocols of 1977 explicitly prohibit torture and other cruel or inhuman treatment. The United Nations Convention Against Torture, ratified by the U.S. Senate in 1990, states that “torture means any act by which severe pain or suffering, whether physical or mental, is intentionally inflicted on a person.” The purposes for which the use of torture is explicitly barred include obtaining information or confession, punishment, or for intimidation or coercement. The Office of the United Nations High Commissioner for Human Rights (OHCHR) has repeatedly declared that waterboarding is a form of torture.

President Obama issued an executive order in 2009 banning the CIA’s torture techniques and signed into law a defense authorization bill in 2015 that included a provision strengthening the U.S. ban on torture. While these actions were praiseworthy (though redundant), Veterans For Peace maintains that the lack of torture accountability and prosecution was misguided and set a dangerous precedent, a precedent which may have opened the door for the torture rhetoric being heard today.

Veterans For Peace believes all torture, including waterboarding, is a human rights violation and constitutes a war crime. We will not defeat terrorism by adopting terrorist tactics. We will not achieve peace by practicing revenge. We will not preserve our precious democracy by abandoning our commitment to human rights. It is appalling that the efficacy of torture is now part of the American conversation. It dehumanizes us when we resort to such baseness. This is not what millions of U.S. military veterans fought for. We should reject such simplistic and vengeful suggestions on the campaign trail. Instead of doubling down on a shameful era, Americans should be turning the page to a new era of peace at home and peace abroad. The tortured logic of waterboarding is not the way to get there.

Veterans For Peace also contends that the torture rhetoric is connected to Islamophobia. Because virtually all of the waterboarding (and other torture methods) was committed against Muslims, it is our position that the call for continued use of torture is tied to anti-Muslim hate and bigotry. By continuing to demonize and vilify Muslims, it makes it much easier to wage war against them, and to propose, in contravention of international law and our own Constitution, the use of torture. If waterboarding were to be suggested for application against, say, people from the Christian or Jewish faiths, Veterans For Peace believes there would be much more widespread outrage and condemnation. This is racism and Islamophobia at the core.