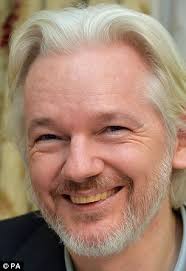 Wikileaks founder Julian Assange has been wrongly subjected to arbitrary detention for five and a half years, according to a ruling by the United Nations Working Group on Arbitrary Detention.  The ruling is critical of Swedish prosecutors, who have refused to interview Assange in London about sex crimes allegations.  It is also critical of the UK government, which is prepared to arrest Julian Assange as soon as he leaves the London Embassy of Ecuador, which has granted Assange political asylum.  The UN Working Group on Arbitrary Detention says that Assange should be able to leave the embassy without facing arrest or extradition.

Veterans For Peace agrees with the UN panel.  It is clear that Julian Assange is facing political persecution due to Wikileaks’ release of U.S. military and diplomatic cables, much of it provided by Chelsea Manning, who is serving a 35-year prison sentence in the U.S.
“Of course, we cannot dismiss Swedish allegations of rape and sexual assault,” said Michael McPhearson, Executive Director of Veterans For Peace.  “However, the political agendas of several governments have sabotaged opportunities for Assange to be held accountable or clear his name.”

Swedish prosecutors have refused to question Assange in London and have insisted on extradition to Sweden, where Assange has not been charged with any crimes.  The UK government, a close ally of the U.S. in its wars in the Middle East, have not disguised their hostility toward Assange.

A Grand Jury empaneled in Virginia has issued a secret indictment of Julian Assange, according to leaked email from Stratfor, a private intelligence group.

“The elephant in the room is the United States government, which made Assange public enemy number one for his courageous whistleblower journalism,” said Michael McPhearson.

Whatever the truth regarding the Swedish allegations against Assange, he has legitimate concerns that an extradition to Sweden could lead to an extradition to the U.S., where he would face the same fate as Chelsea Manning, maybe even worse.

“So it is the United States government that is holding up justice in this case,” said McPhearson.  “If they would come out and publicly state that they have no intention to prosecute or otherwise persecute Julian Assange or Wikileaks, then Julian Assange would probably have no problem traveling to Sweden to answer charges there.”

Anthony Romero, executive director of the American Civil Liberties Union, said the UN panel’s findings should force the US government to end its investigations into Assange over the Wikileaks disclosures: “In light of this decision, it’s clear that any criminal charges against Mr. Assange in connection with WikiLeaks’ publishing operations would be unprecedented and unconstitutional.

“Indeed, even the prolonged criminal investigation of WikiLeaks itself has had a profound chilling effect. The justice department should end that investigation and make clear that no publisher will ever be prosecuted for the act of journalism.”

Veterans For Peace agrees with the American Civil Liberties Union.  We call on the U.S. government to end its investigation and persecution of Julian Assange.