The U.S. is racing down a slippery slope towards war in Iraq and Syria. Since Aug. 8, the U.S. has conducted more than 124 airstrikes in Iraq. Approximately 1,000 U.S. troops are now on the ground in Iraq, with at least 350 more currently on their way.

President Obama initially said the bombing was part of a humanitarian mission to assist the Yazidi minority in northern Iraq being threatened by ISIS, the fundamentalist Islamic army that now controls wide swaths of Iraq and Syria. But Obama has now announced an open-ended bombing campaign, and he has ordered Defense Secretary Chuck Hagel and Secretary of State John Kerry into the region to build military and political coalitions to sustain a long term war against ISIS.

According to the New York Times, President Obama has also authorized U.S. surveillance flights over Syria, reportedly in search of ISIS targets for later bombing missions. The Syrian government has offered to coordinate with U.S. military action against ISIS, the strongest rebel force fighting to overthrow the Assad government in Syria. But the U.S., which has aided ISIS' growth by facilitating the arming and training of rebels in Syria, has not asked permission for its flights into Syrian airspace.

Veterans For Peace members have witnessed the brutality and the futility of war, including the war in Iraq. We were sent to a war based on lies and we became part of the killing of a nation, along with as many as one million of its people. We watched as U.S. policy makers consciously stirred up ethnic and religious divisions, creating the conditions for civil war today.

Veterans know from first hand experience that you cannot bomb your way to peace. More bombing will ultimately mean more division, bloodshed, recruitment for extremist organizations, and a continual cycle of violent intervention.

Last year the American people overwhelmingly sent a message to President Obama and the Congress: No U.S. Bombing in Syria. Last month, the House of Representatives overwhelmingly passed H. Con. Res. 105 stating that there is no legal authority for U.S. military involvement in Iraq without express Congressional approval. By unilaterally pursuing miltiary action in Iraq and Syria, President Obama is acting in contempt of the American people, as well as of U.S. and international law.

We support the troops who refuse to fight and who blow the whistle on war crimes. Under international law, military personnel have the right and the responsibility to refuse to be part of illegal wars and war crimes. U.S. troops are not the cops of the world. There is no legitimate mission for any U.S. service members in Iraq or Syria. We encourage GI's to find out their rights at the GI Rights Hotline.

Veterans For Peace absolutely opposes U.S. military intervention in the Middle East, no matter what the rationalization. We call on all our members to speak out against any U.S. attacks on Iraq and Syria.

We wish to see a U.S. foreign policy based on true humanitarianism and real diplomacy based on mutual respect, guided by international law, and dedicated to human rights and equality for all.

We call attention to the excellent constructive proposals in a recent letter from 53 National Religious Groups, Academics, and Ministers Urging Alternatives to U.S. Military Action in Iraq.

We applaud the initiatives of several key peace groups and we encourage our members to participate. 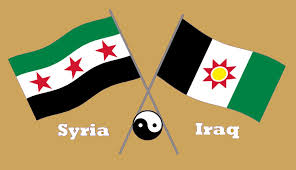 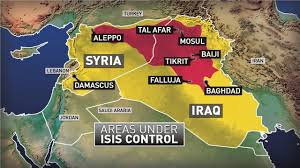 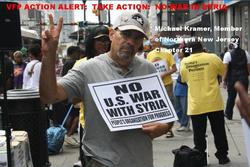