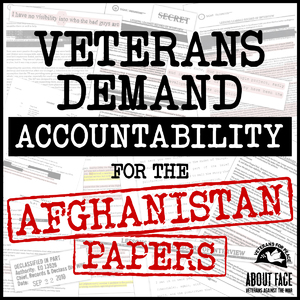 The release of the Afghanistan Papers this week has laid out in clear detail the failed policy and the catastrophic level of malfeasance that reach the highest levels of the U.S. government. Every level of government bears responsibility for misleading the American public and for creating the conditions in which an unchecked military operates without accountability.

The Afghanistan Papers are filled with over 300 people detailing the systematic failure of the military to take any responsibility and blaming the “corruption” of the Afghanistan government, all the while revealing the massive corruption and lies that the U.S. is perpetuating. While military commanders bemoaned Afghan leaders enriching themselves off American tax dollars, those self same commanders were climbing government ranks, earning promotions for promoting endless war.

Soldiers, contractors, and Veterans were routinely marginalized or persecuted in order to maintain the status quo in Afghanistan, up to and including the prosecution of Edward Snowden and Chelsea Manning for their efforts. The integrity of those heroes were questioned while the lies were glorified as truth by a complicit media and government agencies.

Last year the U.S. war on Afghanistan killed more civilians than any previous year. Every single lie detailed in the #AfghanistanPapers and every single year this went on meant overwhelming consequences for families and individuals in Afghanistan, many who are already living in devastating poverty. The U.S. military has destroyed countless villages and continues to create an atmosphere of fear and hatred with covert drone operations that kill thousands of innocent people.

As veterans who have served in these wars and past wars, we are exasperated by leaders that lie to us and lack the moral courage to do anything about it even when there is proof. We demand accountability in real and tangible ways. We are tired of seeing headlines that only result in a Congressional member’s outraged tweet, statements on the campaign trail and slick tv spots, while nothing changes.

Veterans For Peace and About Face: Veterans Against the War gathered veterans who served in the U.S. War in Afghanistan to write the above statement.  If you are a veteran of the U.S. war in Afghanistan sign up here to join a call to strategize on next steps.