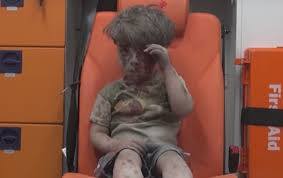 Recently, a compelling photo of a bleeding and seemingly confused young Syrian boy seated in an ambulance in Aleppo was widely distributed and commented upon in domestic and international news media.  In response, some journalists have called for the Obama Administration to "take action," including bombing government military targets in Syria.

Veterans For Peace feels great sympathy for all of the victims in Syria, and for all who have lost family members, friends and loved ones in this terrible war.

Many of us are veterans of military conflicts that were sold to the American public with emotionally compelling but misleading messages and images. We recognize and denounce the manipulation of selected images of human suffering as propaganda used to justify yet further military violence, which will only lead to more death and suffering. Why are we not seeing images of suffering on both sides of the war in Syria?  Why is an image of an injured boy used to call for yet more violence?

The "no fly zones" and "safe zones" that some pundits are calling for in Syria are acts of war that would lead to more violence and destruction, as happened in Libya, a nation that was virtually destroyed by a so-called "humanitarian intervention."

The widely seen photo of the young Syrian boy is just the latest and most graphic example of the psychological warfare being waged against public opinion in the U.S. and worldwide.  Almost every day, the media misrepresents the conflict in Syria as a fight between democracy-loving “rebels” and the “brutal dictator Assad.”  What is actually happening in Syria is foreign intervention to destroy the last secular, multi-religious nation in the Middle East.  Violent extremist groups are receiving arms, training, and support from the United States, and billions of dollars from Saudi Arabia and Qatar, two undemocratic monarchies who have their own reasons for seeking “regime change” in Syria. 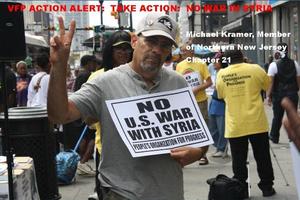 We believe that the only way to resolve the crisis in Syria and to assist the victims of this conflict is to end the fighting, not to escalate it. The Syrian people have the right to elect their leaders and to determine their own future.

We call on the United States government to cease all military, political and economic assistance to armed opposition groups in Syria and to take actions to pressure US allies to do the same.

Veterans For Peace further calls for an end to all economic sanctions against Syria, especially of medicines, including much needed cancer medicines.

We call on the U.S. government to provide massive humanitarian assistance for the millions of Syrian refugees, and to allow more Syrian refugees into the United States.

The Syrian Government has the right to defend itself from foreign aggression and the “regime change” schemes of the United States and its allies.  We call on the all parties to do their utmost to avoid killing innocent civilians.