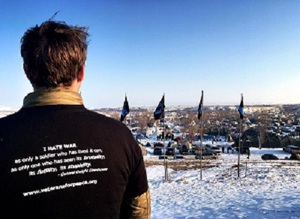 On Sunday, Dec. 4, the U.S. Army Corps of Engineers announced it would not grant an easement to allow the Dakota Access Pipeline to cross under Lake Oahe in North Dakota near the Standing Rock Sioux Tribe reservation. This announcement is a significant victory, though not a final one.

The Oceti Sakowin - Seven Council Fires - the proper name for the people commonly known as the Sioux - and Indigenous people from across the U.S. initiated and led months of non-violent resistance to building the pipeline near Sioux land. There is no way this victory could have been won without their determined leadership, and solemn commitment to nonviolence, which they call "Peace and Prayer."

The Standing Rock Sioux and their many Indigenous allies have inspired thousands of others to join them on the front lines at Standing Rock. Activists from a spectrum of struggles, including the peace and environmental movements to the Movement for Black Lives and Muslim civil rights, stood on the ground in solidarity. As a result, millions of people have been attracted to the cause. The arrival of thousands of veterans to Standing Rock, covered by national and international media, almost certainly put additional pressure on the Obama administration to do the right thing. The effort and outcome thus far is an example of the power of solidarity and non-violent resistance to right injustice. The people have won an important victory the struggle.

Veterans For Peace members have had a regular presence at Standing Rock for months.  At least 70 VFP and IVAW members participated in this huge veterans convergence and most will remain for several more days.

Congratulations are in order. We celebrate the courage of the Indigenous resistance and the many who stood in solidarity, including VFP members, but the struggle is far from over. The announcement from the Army Corps of Engineers  does not rule out approval in the future. Openness to alternative routes may end with the Trump Administration.

Veterans For Peace understands that the road to peace is Peace at Home and Peace Abroad. We will continue to stand in solidarity with oppressed and marginalized people who face economic and social attacks that suppress and exploit their communities. VFP will continue our mission to resist militarism at home, work to abolish war around the world and call for and build peaceful means to end conflicts.