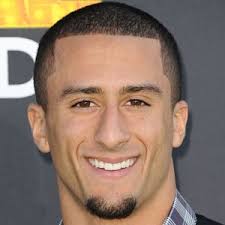 Recently Colin Kaepernick has been in the national news for refusing to stand during the singing of the United States national anthem before the start of National Football League preseason games. His choice to remain seated or kneeling is to protest police misconduct and violence faced by Black people and other people of color. He has been maligned, accused of being unpatriotic and disrespecting active duty service members and veterans.

Veterans For Peace supports every person’s right to freedom of speech. To serve in the U.S. armed forces, our military veteran members were required to take a pledge to defend the Constitution of the United States. One of the most closely held rights recognized in the Bill of Rights is the free exercise of speech.

Veterans For Peace also recognizes that just as Kaepernick has the right to stand or not stand for the national anthem, people have the right to criticize the way he has chosen to express himself. But to question his patriotism and use smear tactics to quiet him is in direct contradiction to the spirit of the right to freedom of expression. His act of protest is a political act to register his discontent with the actions of his government. It is a nonviolent act that demands positive change for a better future for all of us. It is exactly the kind of speech the First Amendment was designed to protect and as veterans we applaud his use of his rights for the cause of equality and justice; rights and ideals that we are told we served to defend.

Veterans For Peace is a diverse organization with members who have varying perspectives about what to do during the singing of the Star Spangled Banner. However, all are disappointed in the U.S. government’s disregard for the wellbeing and safety of people here at home and abroad. Police shootings of unarmed people are the deadliest outcome of U.S. domestic policies. But the indifference and unjust nature of many laws, policies and national social attitudes are reflected in the nation’s failure to meet basic human needs and treatment of the marginalized and most vulnerable. Immigrants are demonized. Members of the LGBTQ and Muslim communities are under fear of physical harm and face persecution. Native Americans continue to fight for their land and self-determination. People go hungry, find themselves homeless or in poor housing. Millions remain jobless, and without access to quality education and mental and physical healthcare. Yet the wealthy of our nation grow richer and candidates fall over each other to pledge to increase spending for militarization of the police, war and preparation for war. On the international stage the U.S. continues an endless war policy that has killed hundreds of thousands if not millions of innocent civilians and displaced millions more. Our nation continues drone warfare that has killed hundreds to thousands of noncombatants caught in the crossfire of failed and immoral war policies. Many of those killed are children.

Veterans For Peace supports Kaepernick’s right to freedom of expression. We applaud his choice to exercise that right and call on others with high visibility to speak out and take action in various ways for peace and justice and demand a fair and just national response to address these and many other critical issues faced by people both here in the U.S. and abroad.