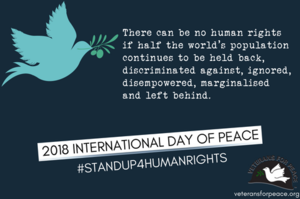 We know that the UN has presented challenges towards achieving a JUST peace. However, as veterans we know that peace is not achieved in the moments before a conflict, and the price of "peace" after war are countless lives lost, survivors scarred, civil society in tatters and resources wasted. A JUST peace is found by building communities that meet human needs. We are all too familiar that injustices felt through poverty, racial inequality, religious bigotry, collapsing inner cities and infrastructures, lack of universal health care, climate change and quality education contribute to war and insecurity.

As veterans we see the connections between greed, the endless wars abroad, the U.S. bloated military industrial complex, and the inequities it brings to the poor and marginalized all over the world. It is not enough that we veterans see and understand the interconnectedness.

If we want to abolish war we must help our fellow citizens here at home see the same connections. We need to understand that dropping more bombs, killing innocent civilians and resorting to military solutions is robbing the world's children of health care, education and meaningful jobs to build a safer and more secure future. We believe that as people see and understand this connection, they will stand up with us against war. We can then work together to put in place the building blocks necessary to build a sustainable and peaceful future.

To that end, we call upon our members, fellow veterans, supporters and greater communities to move beyond talk of ending conflict, and instead adopt and implement practices that build peace at home and abroad.