The Executive Committee of Veterans For Peace is asking VFP chapters throughout the U.S. to approach Black churches, civil rights or community organizations in your area with messages expressing your condolences, your sympathy and your solidarity.  For example, you may want to deliver flowers and a card to Black churches this Sunday.

We Will Resist Racist Violence at Home and Abroad 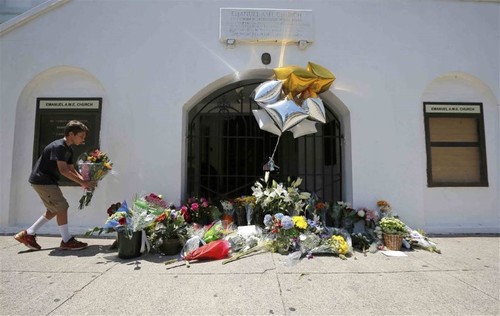 Veterans For Peace is appalled by the racist killing of nine members of the Emanuel African Methodist Episcopal Church in Charleston, South Carolina. We extend our deepest sympathies to their families, to the members of the AME Church, and to the community of Charleston. We understand that this ugly, terrorist act is causing people deep pain throughout the United States and around the world. We wish to stand in solidarity with the African-American community in the coming days and months, while addressing the root causes of this horrible hate crime.

It is no accident that this racist, terrorist action took place in a historic Black church founded by former slaves in a state that still flies the Confederate flag at the statehouse. This reverence by leaders in the highest levels of South Carolina government for a time now gone when the Confederate flag flew proudly over a nation of slave states, is a clear invitation for some to dream of returning to the days of official segregation. The shooter was one of those people — a young white man who proudly sported flags of apartheid South Africa and Rhodesia (now Zimbabwe). His intention, according to his friends, was to restart the Civil War and to return to white rule in the U.S.

Racism and War Are Two of the Triple Evils

There is a connection between increasing racist violence in the United States and the massive indiscriminate killing of hundreds of thousands of people in other lands. Growing racism against black, brown and Muslim people in the United States is a reflection of the racism that justifies killing non-white people abroad. The U.S. military deliberately uses racism to motivate young men and women to kill.

President Obama says that the problem is that we need gun control in the United States. He says no other developed country faces an epidemic of mass murders. But calls for gun control only serve to distract from the root causes for the June 17th tragedy; racism/hate and the belief that violence is a just means to address conflict. Obama himself pulls the trigger on a daily basis, with drone strikes in Iraq, Afghanistan, Syria, Pakistan, Yemen and Somalia, strikes that have killed hundreds if not thousands of civilians.

As U.S. military veterans, we understand that we will not be able to end war and militarism unless we confront racist violence here at home. Racism and war are two of the triple evils Dr. King called on all of us to confront to work for peace and justice.  All three; racism, war and poverty must be defeated if we are to achieve a nonviolent world based on peace, understanding and equality for all.