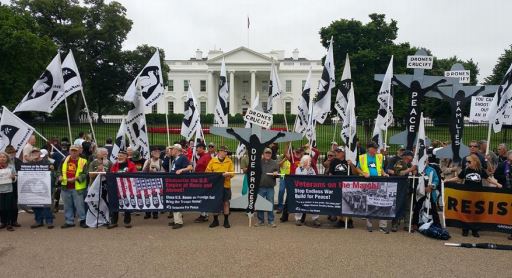 Veterans For Peace (VFP) strongly opposes the National Park Service's proposed limitations on the right to demonstrate near the White House and on the National Mall. This is a thinly veiled assault on our democracy by attempting to erect barriers to criticism of an administration that is systematically violating the rights of people to freedom, liberty and justice.

With chapters in every state and veteran members from WWII to the current era, VFP is dedicated to building a culture of peace, exposing the true costs of war, and healing the wounds of war. Our members actively work to prevent the spread of militarism, replace endless war with diplomacy, and promote a long-term vision of peace and justice. Members of VFP are told that we served in the U.S. military to protect the U.S. Constitution, which enshrines freedom of speech, freedom of assembly, and the right to petition our government for redress of grievances in the First Amendment. Our members have demonstrated in Washington DC in large and small numbers against multiple administrations' policies including; the continuation of endless war across the globe, bombing of other countries, unfair immigration practices, police shootings and misconduct, refusal to protect future generations from the scourge of climate change, oil pipelines that encroach on native lands, and most recently, the elevation of an alleged sexual assaulter to the Supreme Court.

Closure of 80% of the iconic White House sidewalk to public protest is unacceptable. People should not need a permit to exercise their First Amendment rights. Rather than a reduction in areas of protest, there should be an expansion of places designated for demonstrations. Conflating protected First Amendment activity with "special events" such as concerts denigrates our Constitutional rights. Fining people who seek to exercise their rights to freedom of expression and assembly will have a chilling effect on lawful protest.

The Trump administration should not be permitted to immunize itself and future administrations from criticism by reducing protest areas, limiting spontaneous protest, and charging fees for demonstrations. Some think respecting symbols of our nation, such as the U.S. flag, is more important than the ideals they symbolize. This attempt to limit our rights degrades those ideals, the symbols and our service as veterans.

Finally, "thank you for your service," is a common refrain we hear as veterans. Attempts to curtail our rights and the rights of all is an affront to that service. This cannot stand.

Veterans For Peace says yes to the rights enshrined in the First Amendment and no to all attempts to restrict those rights.