Calls for Better Healthcare for GI's and Veterans, and an End to U.S. Militarism 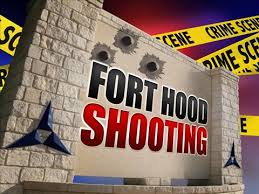 Veterans For Peace members are greatly saddened by the tragic soldier-on-soldier shootings this week at Fort Hood, Texas. Our deepest condolences go to the families of the four soldiers who were killed, including the alleged shooter, Spc. Ivan A. Lopez.

We are also concerned about the impact of the shooting on Fort Hood soldiers and their families, who have already suffered so much from multiple deployments to the U.S. occupations of Iraq and Afghanistan.

This is not the first time that Ft. Hood soldiers have been under attack on the sprawling Army base. Five years ago, Major Nidal Hassan carried out an even greater massacre against soldiers who were preparing to deploy to Afghanistan, killing 13 and injuring 30. Last year, Major Hassan was convicted of murder and sentenced to death.

If there is any silver lining to this latest outbreak of violence, it is that it provides an opportunity for our society to take another look at the plight of over two million men and women who have deployed to war in recent years. It is heartening to see that there is major media coverage in outlets from the New York Times and National Public Radio to Al Jazeera and Democracy Now. Pointed questions are being asked about the adequacy of mental health services in the military, the routine dispensing of addicting medications, the epidemic of military suicides, and the reluctance of military doctors to give a diagnosis of Post Traumatic Stress Disorder, which brings with it costly lifetime disability benefits.

We agree with our fellow veterans at Under The Hood Cafe and Outreach Center and Iraq Veterans Against War who are calling for common sense reforms of medical and mental health care treatment, as detailed in the forthcoming Fort Hood Report. We join them in calling for better, saner treatment for wounded Gi's and veterans. We must continue to press the military to take responsibility for treating the physical, emotional, psychological and spiritual wounds of war, instead of throwing soldiers aside like they were damaged equipment. Our GI's and veterans deserve better than that. There is also an urgent need to end the "suck it up" culture of the military, especially prevalent in combat arms units, so that service members and veterans will feel free to seek much needed mental healthcare.

As an organization whose mission is to abolish war, Veterans For Peace cannot help but make other observations as well. For more than a decade, the U.S. government and military has visited massive, indiscriminate violence, death and destruction upon the peoples of Iraq and Afghanistan. It is all but inevitable that the violence of wars and occupations in faraway lands follows our soldiers back home, where it explodes in many different forms, from drug and alcohol addiction and domestic violence to murder and suicide.

Yes, our government can and should do a much better job of “Supporting The Troops,” a phrase that was cynically used to silence those who questioned the wisdom, legality and morality of launching wars of choice. In the final analysis, soldiers and their families, as well as the society at large, will continue to experience violence at home as long as the U.S. continues with a militaristic foreign policy abroad. It is high time to abolish war once and for all. Veterans For Peace is rededicating ourselves to this goal.

Michael Prysner, VFP Board member, pierces the veil that the corporate mass media refuses to look behind -- the horror story of how the US military treats vets; and how the shooting at Ft. Hood is one symptom of the disrespect and lack of appropriate attention given to veterans in article found on Popular Resistance website entitled, "Shooting At Fort Hood Not A Surprise To This Veteran"

"We need to help people understand: There isn’t something wrong with you. There is something right with you," Michael McPhearson, Gulf War veteran and executive director of Veterans For Peace said. "We need to help you get past what’s going on."

Diane Rejman, VFP Life Time Member and member of VFP South Bay/Peninsula Chapter 101 in California vents her frustration and anger in Counterpunch article, entitled, The Fort Hood Shooting and PTSD. Diane states, "We are a society in denial. Denial about the horrors of war and its effects on a soldier, who was first a human being".

In an interview with PressTV Leah Bolger, past board president and member of VFP Corvallis OR Chapter 132, tells reporter, "The US has failed to provide proper services to the war veterans suffering from a wide range of traumas caused by their experiences in the battlefield".

Iraq vet, Jon Turner, hopes are that those who have served in times of peace and times of war, will be willing to recognize that there might be underlying issues that have contributed to their behaviors since returning home....<More>