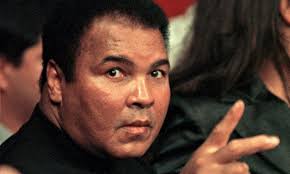 Veterans For Peace recognizes the extraordinary life and courage of Muhammad Ali. Ali was, without question, the greatest heavyweight boxer in history because of his prowess in the ring and because he was a champion who did not shrink from the responsibilities of his times. Winning the world heavyweight boxing championship on February 15, 1964 when the U.S. faced extremely tumultuous times, he could have easily ridden a wave of celebrity and adulation. Instead, Ali challenged the status quo of the nation. He made the U.S. question the war it conducted in Vietnam, the role of racism in the war, and the right of a person to follow their conscience and not the dictates of government. By saying no to war, speaking out against racism and forgoing the riches and fame he would have received by going along to get along, Ali was a living example in action of resisting Martin Luther King’s triple evils of racism, war and materialism.

The physical courage he had to stand in the ring, taking painful punishment to his body, pales in comparison to his moral courage in standing up for his principles. In 1966, when Ali was informed that he was reclassified as 1-A, which meant he was eligible for the draft and induction into the U.S. Army, he publically declared that he would refuse to serve and considered himself a conscientious objector.

Why did he take this stance? Perhaps his own words on the subject of peace and conscience say it best, "My conscience won't let me go shoot my brother, or some darker people, or some poor hungry people in the mud for big powerful America. And shoot them for what? They never called me nigger, they never lynched me, they didn't put no dogs on me, they didn't rob me of my nationality, rape and kill my mother and father... Shoot them for what? ...How can I shoot them poor people? Just take me to jail."

On April 28, 1967, when he appeared at his scheduled induction into the Armed Forces in Houston, as expected when his name was called he refused to step forward. Facing a $10,000 fine and 5 years in prison, Ali found strength in his newly adopted religion of Islam, saying "War is against the teachings of the Holy Qur'an. I'm not trying to dodge the draft. We are not supposed to take part in no wars unless declared by Allah or The Messenger. We don't take part in Christian wars or wars of any unbelievers."

He was stripped of his heavyweight title, restricted from fighting in the U.S. and denied a visa to fight abroad while his case was pending. He was not able to work as a fighter from March 1967 to October 1970, at the age which many consider prime physical time in a fighter’s career. During this period, he toured speaking out against the Vietnam War and advocating African American pride and racial justice. Of course, this period of time was very hard on Ali financially, but he stood his ground on principle.

June 28, 1971, the U.S. Supreme Court upheld Ali’s status as a conscientious objector. By this time, much of the nation had caught up with Ali realizing the war in Vietnam was at best questionable. He had regained license to enter the ring and was on the road to regaining his title as world champion which he did. In 1974, he defeated then champion George Foreman in the famous fight known by many as the Rumble in the Jungle. Some call it the greatest sporting event of the 20th century. It was also a kind of moral victory for Ali and all who supported him and the stance he took against the Vietnam War.

Losing his title to Leon Spinks in 1978, Ali fought a rematch against Spinks and won it back for an unprecedented third time as heavyweight champion. Ali retired from boxing in 1980.  He continued to be an advocate for peace and a lover of humanity. He is perhaps the most famous person of our time. His moral courage was finally recognized by the same government who tried to force him into war and punish him with imprisonment. On November 9, 2005, then President George W Bush awarded Ali with the nation's highest civilian honor, the Presidential Medal of Freedom.

Muhammad Ali never stopped standing up for what is right. As recently as December 2015, though he did not mention Donald Trump by name, he released a statement titled "Presidential Candidates Proposing to Ban Muslim Immigration to the United States" The statement spoke out against the violent acts of “so called Islamic Jihadists”, and, “those who use Islam to advance their own personal agenda.”

Today the world needs people to follow the example of The Greatest, Muhammad Ali. We already miss him. Presente’

I am a Muslim and there is nothing Islamic about killing innocent people in Paris, San Bernardino, or anywhere else in the world. True Muslims know that the ruthless violence of so called Islamic Jihadists goes against the very tenets of our religion.

We as Muslims have to stand up to those who use Islam to advance their own personal agenda. They have alienated many from learning about Islam. True Muslims know or should know that it goes against our religion to try and force Islam on anybody.

Speaking as someone who has never been accused of political correctness, I believe that our political leaders should use their position to bring understanding about the religion of Islam and clarify that these misguided murderers have perverted people's views on what Islam really is.