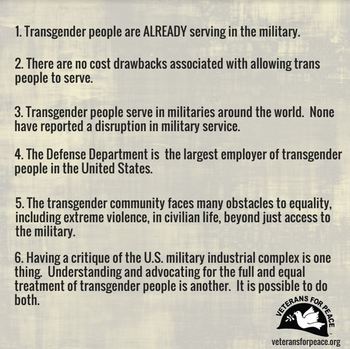 Veterans For Peace condemns President Trump’s effort to ban transgender people from serving in the U.S. military. Veterans For Peace affirms the rights, humanity and identity of trans people and calls on President Trump to reverse his bigoted decision to bar trans people from exercising their right as full citizens to serve in the United States military.

As a peace and justice organization, we abhor war and look forward to a day when all combatants refuse to fight. We work hard and diligently to realize our mission to abolish war. However, as we work to fulfill the mission of ending war, we also stand for justice. The Trump Administration’s pronouncement flies in the face of our stated values as a nation that all are created equal with unalienable Rights. Veterans For Peace stands in solidarity with the transgender community as its members struggle for recognition as equal citizens and free people.

Further, the president’s tweets are a disgrace and a dishonor to transgender people who have participated in the U.S. military.  There are varying estimates that there are 6,000-15,000 transgender service members in the U.S. military today. As a volunteer force, these individuals have the right to choose to join the military.  That should be respected and they should not be targeted for who they are. They should be judged by the content of their character and the quality of their work.

Sources for the graphic:

If you've been mistreated or harassed based on sexual orientation, gender identity, or HIV status, the ACLU wants to hear about it --The ACLU might be able to help.  Please fill out this form.

For a FAQ on Transgender Military Service, SPARTA has provided this helpful document.