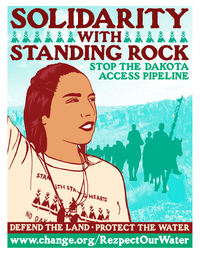 Once again, Thanksgiving is upon us.  As advocates for justice and peace, we all know that this holiday is not the story of unity taught to us.  We know that Thanksgiving marks the celebration of a myth, when the truth is that this time in our history resulted in the slaughtering of thousands of Indigenous People, the stealing and pillaging of their land and the spreading of disease among their people.

This Thanksgiving season, we are witnessing, yet again, brutal acts against Indigenous People and their lands.  The Dakota Access Pipeline is yet another act of violence and genocide against Native people and reminds us that our colonial past is actually our present. It threatens the safety of land and water across the country, as well as violating treaties.  However, the prayerful and powerful resistance at Standing Rock is inspirational and has galvanized worldwide solidarity.

Veterans For Peace understands that the struggle for Indigenous rights cannot be decoupled from other movements for equality and justice. This Thanksgiving we know that there are many struggles around the globe, at home and abroad.  As veterans, we are aware of our legacy as military veterans as participants in the ways in which we have perpetuated injustice across the globe and against indigenous people. We believe that violence and injustice must be challenged and ended in all its forms and that human dignity must be protected and defended.

We know that many people have come to see this holiday as a way to value gratitude, reflection and peace.  Veterans For Peace continues to be grateful for all those who work for peace and express great admiration for the resistance of all peoples against injustice.

This Thanksgiving, we ask that you take action and stand in solidarity with the native resistance at Standing Rock.

Organizers are now calling for a week of action starting on November 25th that will culminate in a Global Day of Action on December 1st.

The main targets are financiers of the Dakota Access Pipeline and the police departments that have been brought in from across the Midwest to brutalize water protectors.

The financial footing of the Dakota Access Pipeline is in jeopardy if they do not complete the project by January 1st. If this deadline is missed, a majority of the stakeholders with contracts to ship oil through the pipeline will be able to renegotiate or cancel their contracts. This could be devastating to Energy Transfer Partners and the other pipeline companies behind DAPL. With its vulnerabilities exposed, our solidarity efforts are needed now more than ever.