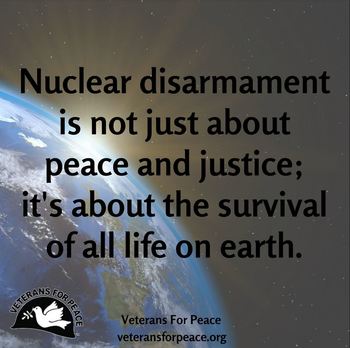 On July 7th, 2017, the United Nations approved a legally binding Treaty on the Prohibition of Nuclear Weapons. At last, the world now has the first-ever treaty to ban all nuclear weapons.

The day the treaty was signed, the U.S. issued a statement that said “We do not intend to sign, ratify or ever become party to it.”  The U.S., the sole remaining superpower, is developing new, more accurate and more lethal nuclear weapons, while deploying "missile defenses" that make a nuclear first strike more possible and more likely.

Veterans For Peace is dismayed that the U.S. refuses to sign the monumental treaty that will make the world a safer place.  The Treaty is a victory for humanity and the shared natural world. It brings Veterans For Peace closer than ever to achieving our mission to abolish war by forwarding our goal of of ending the arms race and to reduce and eventually eliminate nuclear weapons.

Veterans For Peace remains committed to fulfilling our mission, redoubling our efforts to ensure that the United States ratifies the treaty and eliminate nuclear weapons entirely.  Let this be the generation that will finally ban nuclear weapons.

It's not just about peace and justice; it's about the survival of all life on earth.