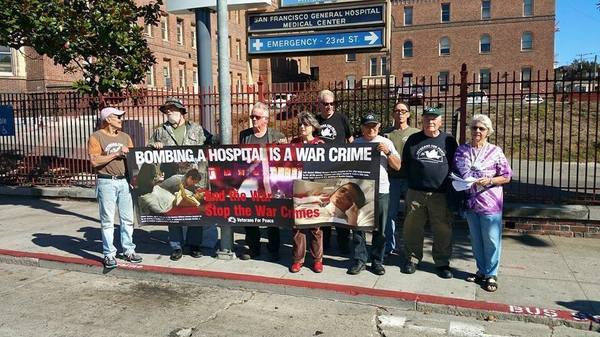 Calls for End to U.S. Led War in Afghanistan

Veterans For Peace condemns the U.S. bombing of the Doctors Without Borders hospital in Kunduz, Afghanistan. The sustained attack by one or more U.S. fighter jets left 22 people dead, including staff members, patients and children, and caused great destruction to the hospital.

A U.S. military spokesperson in Afghanistan has referred to the attack as “collateral damage,” but eyewitness accounts and Afghan military sources indicate the hospital was attacked deliberately, on the pretext that members of the Taliban were treated there.

If the attack was indeed deliberate, then it is a very serious war crime.  We support Doctors Without Borders’ call for an independent investigation.  We have seen what happens when the Pentagon is allowed to investigate itself.  It is high time that the U.S. military be held accountable for the deaths of innocent civilians. We call for all involved, up to the highest level, to be held accountable.

Veterans For Peace also calls for the end of the U.S. led war in Afghanistan and all military personnel brought home.This latest tragedy is not the first U.S. incident in Afghanistan that may be considered a war crime.  The U.S. invasion and occupation that began fourteen-years ago today, has done no favors for the Afghan people. There have been countless incidents where wedding parties, for example, have become “collateral damage.”  Whether by careless mistakes or ruthless deliberate targeting, many thousands of Afghani civilians have been killed. According to a report from the Watson Institute For International Studies at Brown University, 311,000 people — dead and seriously wounded — have become casualties in the interrelated war zones of Afghanistan and Pakistan. Most are combatants, but 117,000 of these casualties are civilians. And though it is extremely hard to document, it is estimated that an additional 360,000 people have died in Afghanistan from the negative effects of war, for example, on public health infrastructure and as a consequence of displacement and malnutrition. 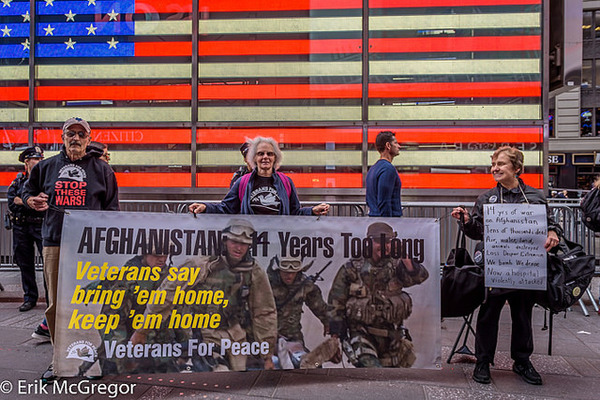 How many incidents of civilian deaths does it take before it is clear that loss of civilian lives and the manner by which they die is unacceptable? Is it realistic to think that after fourteen years of war the feeling of fear and terror brought by U.S. bombs is less than that brought by Taliban fighters? Would we accept this kind of collateral damage or indirect deaths from war on U.S. citizens, or would we try a different way? Are Afghans lives worth less than American lives?

The people of Afghanistan, which include the Taliban, must work out their differences. While it is true that the Taliban does not adhere to international human rights standards, it is also true, as revealed by Amnesty International and news reports, the U.S. and its coalition partners constantly commit human rights violations for which there is little accountability. The U.S. cannot legitimately call for protection of human rights while at the same time violating human rights.

It is time to take a different approach to the conflict in Afghanistan. Fourteen years of war has not brought peace.After more than a decade of funding to the Afghan government and the deaths of U.S. and NATO troops, Taliban fighters and civilians, the only reason the Afghan government remains in power is because of U.S. presence. The U.S., a foreign power is deciding who should lead in Afghanistan. That is not freedom. That is not self-government.  President Obama must finally end the war in Afghanistan. The people of Afghanistan must form their own union. The international community must pressure the Afghan government, Taliban dominated or not, to follow international law and respect human rights. A real diplomatic effort must be brought to bear to end the violence so that the people of Afghanistan can rebuild civil society and create space for human rights activists to struggle for a just society. This cannot happen at all in a war zone.  It will be a hard and long road to walk, but the road of war has been tried and has proven to only lead to more war and death, not peace and security. It is time for a radical shift in policy, not to recommit to more of the same. The U.S. must end the war and occupation and bring our troops home now.

Order the 'Hospital Bombing' banner today for your local action!