Veterans For Peace has released a response to President Obama’s strategy to confront ISIL calling on the president to use diplomacy and to follow his own advice that there is not a military solution to the problems in Iraq. The organization of veterans, spanning from WWII to the current string of U.S. wars,warns that the president’s plan continues to make the U.S. the “greatest purveyor of violence” on earth and places service members in harm’s way when there are other solutions. They call on the president to take six non-military actions to avoid the slippery slope of sending troops to Iraq as well as to stop sending weapons that fuel all sides of the conflict. The group calls for diplomacy to be the number one priority and to include Iran as a partner to help pressure the Iraqi government to be more inclusive of Sunni leaders. Veterans For Peace points out that there cannot be success in confronting ISIL in Iraq without Sunni help and that bombing these communities, who up to now are supporting ISIL because of bad relations with the central government in Baghdad, will not help mend fences.

Veterans For Peace President Patrick McCann commented, “We are disappointed because President Obama’s so called plan is more of the same. Nothing really different than waging war like the U.S. has done for thirteen years. Never mind that according to a State Department report, global terrorism has increased by 43% in 2014.” He went on to say, “Who really benefits from these failed policies? Clearly not the American people who pay for it in money and blood.”

“We are not surprised by the president’s military solution because for the past thirteen years our political leaders have not put forward any other kind of solution. It seems all they know is war and have no concept of how to work for peace,” states Michael McPhearson, Interim Executive Director. “Just as meeting violence with violence in our communities here at home does not solve economic and social problems, more violence in Syria and Iraq will not solve the conflicts or diminish the political challenges there.”

Veterans For Peace response to the president’s plan states, in part: President Obama outlined a strategy no different from what the U.S. has done for the past thirteen years. It is not a plan for success, it is a gamble that war will work this time when it has spectacularly failed thus far. We at Veterans For Peace challenge the American people to ask whose interests does endless war serve?  Who is paying for these wars, whose children are dying in these wars and who is getting paid to finance and provide weapons for these wars? We the people are being driven by manipulated fear to support polices that are not in our interest. Peace is harder than war, but it is cheaper in blood and treasure. After thirteen years it is time to take another path, the path of peace. 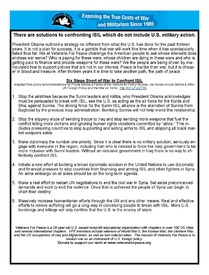