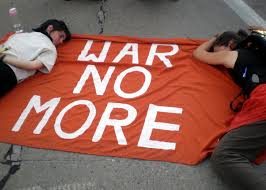 Fourteen years after the fall of the World Trade Center towers in Manhattan, Paris, a city beloved by the world, has been dealt deadly blows by fanatical terrorists. It is the worst attack on Paris since World War II.

Amid the clamor for revenge, and despite the clear failure of the United States’ so-called war on terror that sparked the destabilization of the Middle East and the rise of ISIL, French President François Hollande has promised a “ruthless” campaign against ISIL, in other words, a war that will be cruel, uncompromising and merciless.

Such a war will undoubtedly lead to more deaths of innocent men, women and children and an increase in the number refugees, already at historical proportions. It will further radicalize many as it deepens the profound distrust of the West felt by people throughout the Middle East.

Veterans For Peace believes that more war is not the answer and that peace is possible, but we must first acknowledge that people’s fears are real. We realize that fear does not always lend itself to the clear and reflective thinking that will improve our understanding of the situation and mitigate the impact of fear. We understand terrorism is real and we must be vigilant in our efforts to confront and stop it. But invading more countries, dropping more bombs and killing yet more innocent civilians in Muslim countries are not the answers.

If we, the people, can pressure our government to change its policies, then we need not be immobilized by fear. Concrete steps can be taken to confront terrorism by ending the U.S.’s continuing contribution to violence in the Middle East.

For the past 14 years, U.S. politicians have continually gambled that war will work. They have sent U.S. service members to participate in a failed policy of endless war, a policy that has resulted in thousands of their deaths and tens of thousands physically wounded and psychologically scarred. Untold numbers of civilians have been killed and wounded with millions displaced in multiple countries as a result of these policies.Forbes magazine reported that the monetary cost for these failed policies is $1.7 trillion. This is money that could have been better spent at home and abroad to support human needs: create jobs, help people find dignity and build a peaceful future.  Yet we are told again and again that war is the answer.

If nothing else, the last 14 years have shown that this is a war the West cannot win. Instead of more war planning, now is the time to assess how the West has historically and disastrously tried to control the Middle East and understand that the root cause of this increase in terror has its genesis in our policies there. The West’s involvement in the region for the last 100 years has demonstrated our ineptitude. Beginning with the secret Sykes-Picot agreement between the British and French to dismember the Ottoman Empire, unapologetic U.S. support of Israel, the overthrow of democratically elected governments in Iran and Iraq, the installation of the Shah in Iran and the endless wars that continue to ravage the region, we must understand that our actions and duplicity have set the stage for the blowback now being experienced in the West, with its most recent manifestation in Paris.

There is no doubt that the U.S. strategy in Iraq, which pitted Sunni against Shia and supported a sectarian Shia government that has marginalized Sunni communities, created a huge segment of people who are humiliated, frustrated, unemployed, and see no future—except with ISIL. The same can be said of the destruction the United States and NATO have wrought in Libya, where the elimination of the dictator Gaddafi has left an ungovernable state and an unabated flow of weapons and fighters throughout the region.

Terrorism is a tactic and an idea. It arises out of hopelessness, fear, despair and a lack of compassion. We must not let fear, anger, frustration and the need to do something drive us to make choices that merely exacerbate the problem and increase the impact of crippling fear. Bombs, boots on the ground and occupying a country cannot defeat an idea.

We must chart a different course that reduces our involvement and allows people to determine their own fate. We can shift from the inevitability of fear to a new reality of constructive engagement. Nothing other than a complete turnabout in our foreign policy can deal with the root causes of terrorism. In the short term, it is an intelligence and policing problem and not a military one. We must use intelligence resources in a cooperative way with our allies and our law enforcement agencies. In the long term, we must invest in global human needs and provide a path to a productive future for all.

We cannot answer every bomb with more and bigger bombs. We cannot continue to create military confrontations with nuclear-armed Russia and China. We need a new breed of courageous leaders who will listen to the people, not the militarists, the arms manufacturers, the oil companies and the global corporations.

We at Veterans For Peace say: Enough. We challenge the American people to ask: whose interests are served by endless wars? Who is paying for these wars? People are being driven by fear manipulated to support policies that are not in our interests. Peace is harder than war, but far less expensive in blood and treasure. We need not be marginalized by fear. We must compel our government to take another path.

In the words of John F. Kennedy, “Peace is a daily, a weekly, a monthly process, gradually changing opinions, slowly eroding old barriers, quietly building new structures. And, however undramatic the pursuit of peace, the pursuit must go on.”

Download VFP's Suggested Solutions to Confont ISIL which do not include U.S. military action.