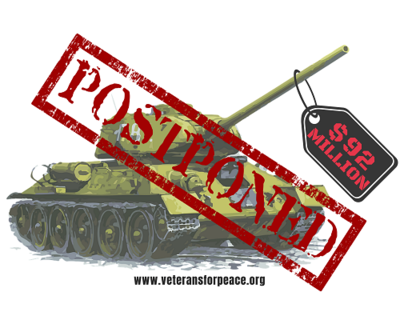 However, our commitment will not waver until this gross display of militarism is canceled.  As military veterans from WWII to the current era of conflicts, who have trained for, and in many cases, fought in U.S. wars, we know that a parade demonstrating our military might will do nothing to end wars, bring about peace or help our fellow veterans and active duty service members.

At a moment when the U.S. is aggressively posturing around the globe, taking us further away from moments of diplomacy and peace, attacks on veterans healthcare, deportations and a mental health epidemic where veterans and service members commit suicide at a rate of 21 times a day, a military parade is not where our priorities should be focused.

Veterans For Peace will continue to organize until this parade is canceled and will continue with our efforts to “Reclaim Armistice Day” with a  solemn procession in Washington D.C. on November 11 to mark the 100th anniversary of the Armistice that ended the horrible carnage of World War I.