The people of Hiroshima and Nagasaki experienced the horror of nuclear bombs dropped on their churches, on their schools, on their cafes, on their streets, on their homes and their families. Today the last survivors of those bombs, known as the Hibakusha, continue to appeal to the world to rid itself of these terrible weapons of mass destruction and mass suffering.

We continue to be dismayed at the lack of accountability that the U.S. has taken towards unleashing the most devastating attack the world has ever seen.  The U.S. remains the only country in the world that has used nuclear weapons, of which the side effects are still being felt today.

Veterans For Peace now takes up the call of the Hibakusha. We who have trained for war and experienced war know its meaningless violence, its futility, its lies and false promises. We want to abolish all war, to end the violence of military intervention, and the threats of nuclear destruction.

Together with the courageous Hibakusha survivors, we call on the world to rid itself of nuclear weapons and to renounce war once and for all.

Veterans For Peace Apologizes to Japanese People and the World

Veterans For Peace expresses our deepest condolences to all those who were killed and maimed, and to their families. We apologize to the Hibakusha, the survivors of the nuclear bombings, and we thank them for their courageous, continuing witness.

We apologize to all the Japanese people and to all the people of the world.  This hugely atrocious crime against humanity should never have happened.  As military veterans who have come to see the tragic futility of war, we promise that we will continue working for peace and disarmament.  We want to see nuclear disarmament in our lifetime. 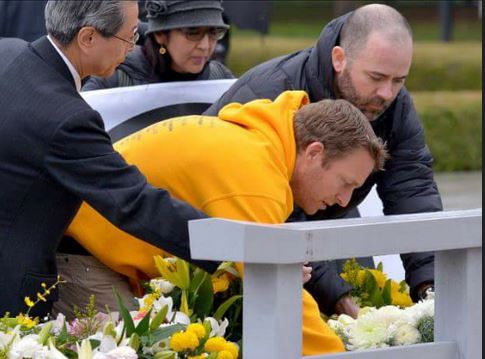 Make sure to check out the ways VFP is working to Abolish Nuclear Weapons!

Many chapters will participate in memorial services over the week of August 6-9th.  VFP has created some resources, including a handout of our statement.

To request print-outs, contact Samantha by emailing samantha@veteransforpeace.org or fill out this form!