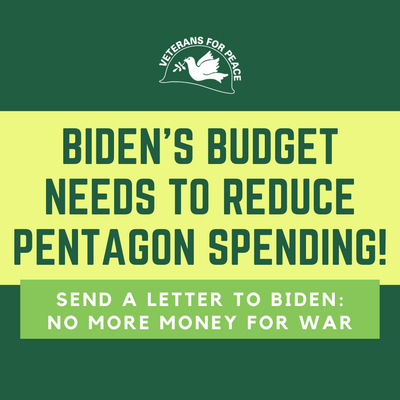 Veterans For Peace is outraged that President Biden’s budget released this week INCREASES Pentagon spending. This is unacceptable. It is far past time for the U.S. budget to reduce a over-inflated Pentagon spending. This budget does not reflect the overwhelming majority of public opinion that supports re-prioritizing military spending towards programs that benefit regular people and their families.

In the post-9/11 years alone, the United States has spent $6.4 trillion dollars on warfighting and the maintenance of a needless and ill-advised overseas presence.  Considering that the Pentagon has returned $80 billion that it could not spend in recent years and could not pass its first two financial audits, a reduction seems like a reasonable proposition, to say the least.

As military veterans from WWII to the current era of conflicts, who have trained for, and in many cases, fought in U.S. wars, we know that endless wars, failed weapons and the Pentagon’s corporate handouts do nothing to make us safe.

Veterans For Peace asks that President Biden start reinvesting our overinflated military budget on domestic needs, infrastructure repairs, social safety net programs and an emphasis on diplomatic action that might keep us out of avoidable wars.

Can you take action today and let President Biden know that veterans want a budget that reflects HUMAN NEEDS and not more overinflated military spending?