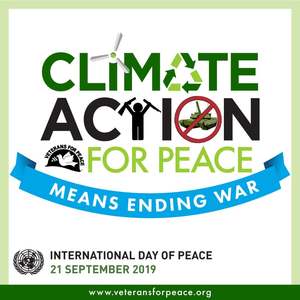 Catastrophic climate change is an imminent danger facing the world.  This year for International Peace Day, the U.N. has declared the theme to be “Climate Action for Peace”.  Taking action on climate change is vital as a way to promote peace throughout the world. Ending war and militarism are vital if we are to create a sustainable future.

Climate change causes clear threats to international peace and security. Natural disasters displace three times as many people as conflicts, forcing millions to leave their homes and seek safety elsewhere. The salinization of water and crops is endangering food security, and the impact on public health is escalating. The growing tensions over resources and mass movements of people are affecting every country on every continent. Peace can only be achieved if concrete action is taken to combat climate change.

As veterans, we also know that the environment has long been a silent casualty of war and armed conflict. If we are going to win on climate, we must make the connections between the environment and militarism.

For centuries, war has not only involved the annihilation of human life, but also environmental destruction in the forms of both 'collateral damage' and deliberate damage to the environment. In addition, instead of working for a cleaner, cooler future, our tax dollars are being spent on human death and environmental destruction. Money spent on endless war is money not spent reducing our dependence on fossil fuels or supporting the transition to a low-carbon economy.

If we want to abolish war and deal head-on with climate change we must help people here at home uncover these same connections.  The U.S. military machine is responsible for catastrophic damages through our endless wars, expansive military bases, (many of which are in violation of environmental regulations), weapons testing and massive consumption of resources.  Ending war and holding our government accountable for the damage it does to the environment through war is paramount in achieving “Climate Action for Peace”.