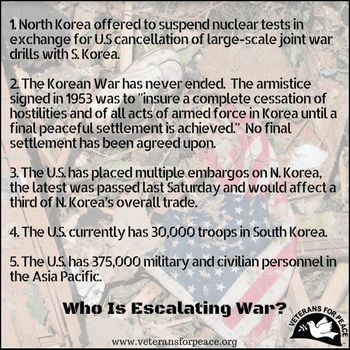 Veterans For Peace continues to urge for diplomacy with North Korea.  The belligerent language from President Trump is only exacerbating an already aggressive U.S. policy towards North Korea.

It is more important than ever that the U.S. begins seeking diplomatic solutions that involve all regional powers towards peace.  Increasingly the world is moving towards a nuclear stand-off. The United States has continued to expand their military position in Asia and advocating for deadly sanctions on Korea.

We call upon the United States to immediately: