Wars always take a toll on a democratic society. In the process of making war our government regularly overrides elements of our Constitution and international treaties. The drive for wealth among individuals and corporations results in war profiteering. The need for 'security' results in racial profiling, unjust detention and invasion of privacy and torture.

In June 2011, the Eisenhower Study Group, a nonpartisan, nonprofit, scholarly initiative based at Brown University's Watson Institute for International Studies, released an excellent detailed study of the effects of the Iraq war in these areas. The links below refer to their work.

In Iraq and Afghanistan, the U.S. continues its practice of carrying out wars in violation of the Constitution and various treaties and international law. 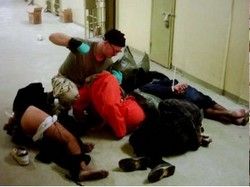 “No exceptional circumstances whatsoever,whether a state of war or a threat of war, internal political stability or any other public emergency, may be invoked as a justification of torture.”