The administration's budget for 2012 for the War Department -- euphemistically known since World War II as the Department of Defense -- is about $707,000,000,000. However, that leaves out $20 billion for nuclear weapons research, development and clean up; $117 billion for ongoing wars in Iraq, Afghanistan and Pakistan and the various military outlays the government puts in other departmental budgets, like the FBI and NASA. Add it all up without Washington's thumb on the scale and this year's total for the military is more like $869 billion.

BUT! to that $869 billion for current military spending we must add $123 billion for this year's Department of Veterans Affairs budget and $380 billion for debt payments on past wars which comes to a grand total of just under $1.4 trillion, or 48% of everything the federal government proposes to spend this year! 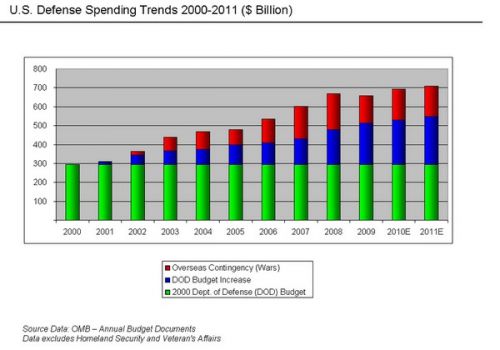 That is just one of the true costs of war. We pay much more than dollars to live in a militarized society or as some call it, a "war economy." To use the War Department's own language, what about the "collateral damage" here in our own country...the shuttered libraries, closed swimming pools, public transit cutbacks, teacher layoffs, inadequate police and fire departments and miserable postal service?

It is difficult to comprehend dollar amounts when they are counted in the billions and trillions, so let's look at some documented comparisons that may make the DoW (Department of War) $869,000,000,000 budget for 2012 seem a little less surreal.

See how much your city, county or state has sent to the wars in Iraq and Afghanistan.