Lies in the Recruitment Process

According the New York Times, nearly one of five United States Army recruiters was under investigation in 2004 for offenses varying from "threats and coercion to false promises that applicants would not be sent to Iraq." One veteran recruiter told a reporter for the Albany Times Union, "I've been recruiting for years, and I don't know one recruiter who wasn't dishonest about it. I did it myself."

Over two million service members have been to the wars and returned since 2001. Recovery from the trauma of military training and service is not automatic. There are estimates that 20% of veterans suffer from post-traumatic stress disorder. Child abuse has been three times higher in homes from which a parent is deployed, for example, and police and courts are dealing with skyrocketing partner abuse rates, which are up 177 percent in Army families since 2003.The Veterans Administration estimates that 300,000 veterans are homeless on any given night. Unemployment rates have been two percentage points higher among war veterans than civilians.

The VA estimates that a veteran takes his or her own life every 80 minutes — 6,500 suicides per year. That’s 20 percent of all suicides in the United States. 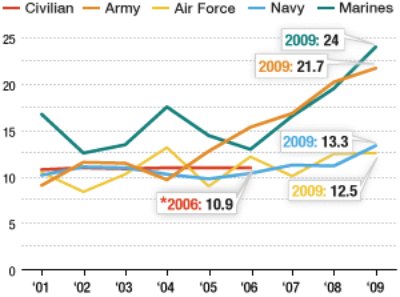 Sources: US militry branches and Centers for Disease Control

More than 600,000 Americans have served multiple tours in Iraq and Afghanistan.

Since before Caesar created the Roman Legions, rape and sexual assault have been part of war and the military. A 2003 study in the American Journal of Industrial Medicine found the rate of rape in the military was 30%, or twice as much as in civilian life.

One in ten men report being raped during their time in the military. Additionally, hundreds of military recruiters have been accused of sexual assault in the last decade. 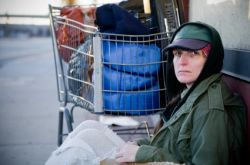 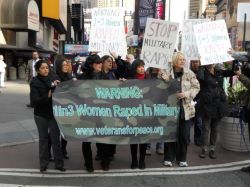