The Veterans Peace Team (VPT) was created in 2011 to act as an unarmed, nonviolent presence standing with peaceful protesters, taking a front line if necessary, confronting, documenting, and opposing any and all use of force by police, national guard, regular military, or private contractors against peaceful protesters exercising their right to assemble and seek redress of grievances.

The Veterans Peace Team was developed during the Occupy Wall Street movement in 2011, when multiple cities held space in public gathering spots to protest growing economic injustice. The severe repression by city government and police in cities across the country led to arbitrary arrests, a fractured skull for one veteran and a ruptured spleen for another, near-asphyxiation and trampling of peaceful protesters and pepper-spraying of students sitting peacefully on a sidewalk obstructing nothing at all, among many abuses and injuries.

During Occupy and subsequent protests and gatherings domestically, Veterans Peace Teams recognized that our unique position as veterans could be valuable on the front lines. As veterans of conscience, we are compelled to take a stand against police violence, in partnership and in communication with communities on the ground.

In 2013, Veterans Peace Teams began traveling internationally, with a trip to Palestine. Our intention as nonviolent veteran activists was not just to observe, return home, and report but to stand shoulder to shoulder with Palestinian and Israeli activists as brothers and sisters, observing, recording and taking the same risks as they do every day in the face of overwhelming IDF use of force. Since that first trip, Veterans Peace Teams have also deployed to Jeju Island, South Korea, Okinawa four times and Palestine again in 2017.

Become a member of a Veterans Peace Team

We invite you to apply to become a member of Veterans Peace Team (VPT) and join with military veterans and their allies across the U.S.

The mission of the Veteran Peace Teams is to act as an unarmed, nonviolent presence standing with peaceful protestors as they resist oppression, taking a front line position if necessary, nonviolently confronting, documenting, and opposing the use of force by police, national guard, military units or private contractors against peaceful protesters exercising their right to assemble and seek redress of grievances. The Veterans Peace Team Project will provide an on-going structure to train, form, finance, and field Veteran Peace Teams in rapid response to dynamically changing conditions at home and abroad. Veterans Peace Teams adhere strictly to the Veterans For Peace Mission Statement.

Veterans Peace Teams are dedicated to responding nonviolently to all police provocations and standing in solidarity with nonviolent protesters who are exercising their First Amendment rights. Because we will be standing between the police and demonstrators in what may be tense, stressful, chaotic or even violent situations, it is important that we maintain our nonviolent demeanor no matter what we are faced with. To that end, we want to assure that all members of the Veterans Peace Teams have the training, preparation and experience they need to fulfill our mission. 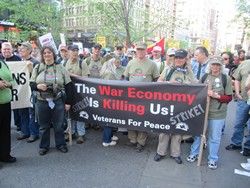