Iraq Water Project was conceived in 1999 to address and challenge the intolerable sanctions regime whose purpose---not very carefully hidden---was to make life so miserable for Iraqis that they would overthrow Saddam Hussein and place in power a government compliant with US interests. This system of sanctions stayed in place some 13 years, and very helpfully wrecked Iraq’s economic and social structure. The water system collapsed with everything else.

When US forces marched into Iraq in the spring of 2003---the second massive invasion---Veterans for Peace Iraq Water Project was already in its fifth year. US military action and political bullying inflicted grave hurt on the people of Iraq. Iraq Water Project tries to bear whatever weight it can upon the opposite side of the fulcrum.

In its first years IWP, with the on the ground assistance of an Islamic/American NGO called Life for Relief and Development, funded the rebuild of six small to medium size water treatment plants prior to the invasion of 2003. We sent three delegations to visit sites---including a city we had never heard of called Falluja---and actually to share some of the physical work. Shock and Awe put an end to this approach as costs rose like an intercontinental ballistic missile once the occupation began.

Subsequently, and continuing today, the project has supplied small water purification units, ultraviolet and reverse osmosis, to various public institutions throughout Iraq, primarily hospitals, clinics and schools. These devices, pricing out somewhere between $1000 and $1500, are affordable for us so long as contributions keep coming in.

We have crossed the 150 unit horizon, but an advisement must be added. Work in Iraq is still very dangerous, and for organizations with known or suspected western affiliations, it is even worse. Life for Relief and Development has experienced this---their project manager was murdered several years ago

IWP had for years its own three man Iraqi team placing and plumbing the water units, but this team broke up in 2011 under threat of death, by whom we don't know. Loss of the team crippled ability to do follow up maintenance on the units placed by them. Working with other groups, however, including an Iraqi youth organization, whose name is not mentioned here for security reasons, we have made encouraging progress in this important area of continued maintenance and repair.

All the same,Iraq is still a war zone---of our country's making to a large degree. IWP can only look forward to the day when a more stable Iraq will once again provide for its own water needs without us.

Clean water is an essential for any nation pretending to care about its people. Iraq at one time was well along the road to providing this necessity, but a whirlwind of conflict sucking up Iraq, Iran and the United States swept all this progress away in a matter of a few years. Politics is murky, but the consequences upon people are not: life for most Iraqis went to hell. Safe drinkable water became a luxury, and the poor, the aged and the infant suffered the worst---those at least who survived.  These many years later precious few can even now count on something so simple as a safe cup of tap water 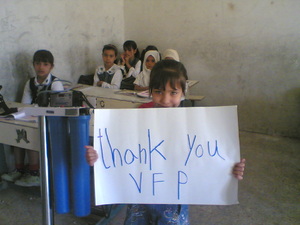 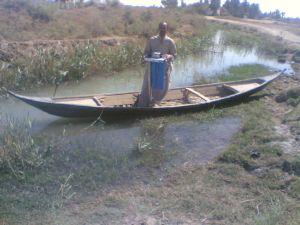 A more comprehensive history of IWP is archived at the website iraqwaterproject.org along with details on the water systems and more. Our partners in Iraq have included: