Peace In Our Times is currently suspended until 2020. Notification of new publication dates will be published in the weekly eNews or other VFP media.

Thank you for your patience,

Peace in Our Times is a quarterly print publication that provides information to the general public, to law-makers, and to our justice-seeking allies on activities by VFP members, U.S. war crimes, war criminals, and the true costs and causes of war. While we recognize that the United States has long relied on unlawful military force to further its foreign policy goals, we are particularly concerned with the blatant and egregious violations of international law committed by the United States beginning with the administration of George W. Bush and now continued and expanded under President Obama. We also carry articles on women’s struggles, antiracist activism, immigration, Islamophobia and other issues related to VFP’s vision of Peace at Home, Peace Abroad.

When Kim Carlyle and his team decided after six dedicated years that the Fall 2014 issue of War Crimes Times would be their last, we all felt a deep sense of loss. In response to popular demand, a small group of VFP members have decided to continue the effort under a new name. The first issue of Peace in Our Times came out in mid-February 2015 to very enthusiastic reviews. Our 5th issue will be out at the end of January 2016. We are currently printing 20-page tabloid papers with full-color front, back and centerfold. Our editorial team includes Ken Mayers, Mike Ferner, Becky Luening, Ellen Davidson, Fred Nagel, Doug Rawlings, and Managing Editor Tarak Kauff, who was a founder of War Crimes Times and an editor of the paper from 2009 until 2012.

Special Edition of Peace in Our Times: Reclaim Armistice Day! 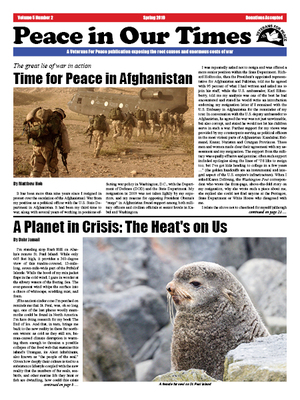 Peace In Our Times Editorial Team