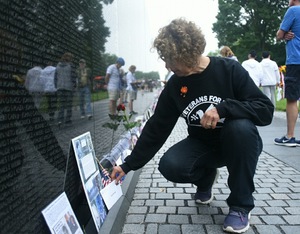 Veterans For Peace will be in Washington D.C. on Monday, May 28th, to hold their annual "Letters to the Wall" at the Vietnam Veterans Memorial, hold a peace ceremony at the Korean War Veterans Memorial and host a touring memorial, The Swords to Plowshares Belltower.

Korea Peace Ceremony: Veterans will then hold a small Peace Ceremony in observance of the 65th anniversary of the temporary Armistice Agreement of the Korean War this year, to celebrate the bold step toward peace taken by North and South Korean leaders in their joint Panmunjeom declaration, and to call for an official end to the lingering Korean War with a peace treaty.
WHEN/WHERE: May 28th, 12 p.m., Korean War Veterans Memorial

Swords to Plowshares Belltower:The Belltower is an active display, covered with windblown plaques with personal inscriptions in many languages about the effects of war. The belltower is currently traveling after winning a grant from the North Carolina Humanities Council to document the stories that people share.
WHEN/WHERE: May 27-28th , 4 Daniel French Dr SW (map)
WHAT: Strong Visuals
PROMOTIONAL VIDEO (May be posted on News Media websites or excerpted for broadcast purposes.)

Veterans For Peace is an international organization made up of military veterans, military family members and allies; accepting veteran members from all branches of service. Our networks are made up of over 120 chapters across the United States and abroad.