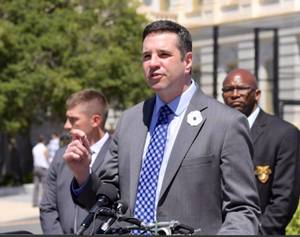 Representatives Walter Jones (NC-3) and Congresswoman Tulsi Gabbard (HI-2) introduced legislation requiring that, if a president initiates or continues any war that does not have a congressional declaration, that action is an impeachable offense. VFP members Matthew Hoh and Mike Marceau helped introduce this legislation, July 18th. Congress must take up its Constitutional responsibility for deciding when to take the American people into war and when to continue working for greater-peace alternatives.

The legislation would stipulate that when a president initiates any war without a prior congressional declaration, that action will constitute an impeachable offense and cause the House to send to the Senate for trial one or more articles of impeachment. The legislation states that this includes wars against governments or "non-state actors," and applies whether the president is initiating a new war or joining an existing war with other parties.

Be sure to check out this great coverage from Stars and Stripes, Lawmakers: Presidents who bypass Congress on war powers should face impeachment

To see the wrap up press release from Rep. Gabbard, including some great quotes from Mike Marceau and Matt Hoh