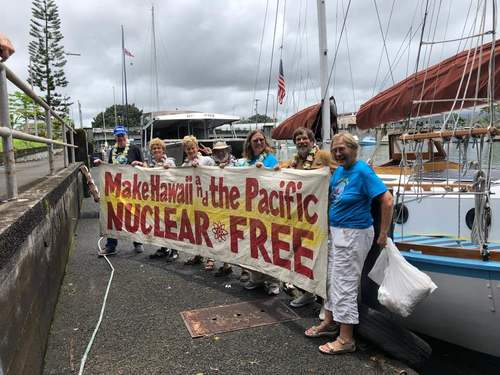 On November 6, 2019, the City and County of Honolulu joined hundreds of other cities, counties, and the US States of Oregon, California and New Jersey in...

"...calling on the United States government to ratify the United Nations Treaty on the Prohibition of Nuclear Weapons and take other measures to stop the possibility of nuclear war!
The Council unanimously passed Resolution 19-262, which also

Golden Rule was in Ala Wai Harbor in Honolulu in 1958 on the way to the Marshall Islands to interfere with atmospheric nuclear bomb testing. The U.S. Coast Guard stopped the boat and jailed her crew, bringing international attention to the dangers of radiation floating all around the globe at the time, and building support for the Partial Nuclear Test Ban Treaty signed by President Kennedy, the UK and the USSR in 1963.

The rebuilt Golden Rule, a project of Veterans For Peace, is back in Hawaii, 61 years later, headed to the Marshall Islands, Guam, Okinawa, and on to Japan to commemorate the 75th anniversary of the horrific atomic bombing of the civilian populations of Hiroshima and Nagasaki.

"We are "Sailing for a Nuclear-Free World and a Peaceful, Sustainable Future," said Gerry Condon, president of Veterans For Peace. Thanks to longtime Honolulu peace activist Debbie Kimball, who championed the resolution and Col. Ann Wright (Ret.) and Project Manager Helen Jaccard, who spoke in favor of the Resolution.

BE IT RESOLVED by the Council of the City and County of Honolulu that the United States government is urged to embrace the Treaty on the Prohibition of Nuclear Weapons and make nuclear disarmament the centerpiece of the United States' national security policy; and

BE IT FURTHER RESOLVED that the Council calls upon federal leaders and the nation to spearhead a global effort to prevent nuclear war by renouncing the option of using nuclear weapons first, ending the President's sole, unchecked authority to launch a nuclear attack, taking U.S. nuclear weapons off hair-trigger alert, canceling the plan to replace its entire arsenal with enhanced weapons, and actively pursuing a verifiable agreement among nuclear-armed states to eliminate all nuclear arsenals; and

BE IT FURTHER RESOLVED that the Council declares its support for Veterans For Peace and the Golden Rule Project and encourages all residents to welcome the Golden Rule peace boat and her crew to Oahu; and

WHEREAS, when speaking about the Cuban Missile Crisis, former Defense Secretary Robert McNamara said, "It was luck that prevented nuclear war," yet America's nuclear policy cannot rest on hope and luck; and

WHEREAS, the planned expenditure of over $1 trillion to enhance the United States' nuclear arsenal will increase the risk of nuclear disaster and may fuel a global arms race; and

WHEREAS, in February 1958 four Quaker activists sailed the Golden Rule, a boat built to engage in environmental direct action, from California towards the Marshall Islands in an attempt to stop nuclear bomb tests there; and

WHEREAS, after stopping for provisions in Honolulu, when the Golden Rule attempted to continue its voyage to the Marshall Islands, the U.S. Coast Guard twice forced the boat to sail back to Honolulu and arrested its crew; and

WHEREAS, there were protests against the arrest of the crew of the Golden Rule around the country and around the world; and

WHEREAS, the actions taken by the Golden Rule crew in 1958 and subsequent protests helped Convince President Kennedy to sign the Limited Nuclear Test Ban Treaty of 1963; and

WHEREAS, the boat's restoration from 2010 to 2015 was supported by Quakers, Veterans For Peace, and hundreds of donors and volunteers; and

WHEREAS, thousands of supporters have seen the Golden Rule and hundreds have sailed on the small ketch; and

WHEREAS, the Golden Rule is now 'Sailing for a Nuclear-Free World and a Peaceful, Sustainable Future' and the Golden Rule Project is the embodiment of the mission of Veterans for Peace to "end the arms race and to reduce and eventually eliminate nuclear weapons"; and

WHEREAS, the Golden Rule is currently visiting the Hawaiian Islands through 2019 as the start of a Peace in the Pacific Voyage and will continue on to the Marshall Islands, Guam, Okinawa, South Korea, and Japan, among other stops; and

WHEREAS, the Golden Rule is scheduled to visit Oahu from October20 through November 30, 2019; and

WHEREAS, the Golden Rule Project, an educational project of Veterans For Peace, is a member of lOAN and supports the TPNW and the "lOAN Cities Appeal" which calls on cities, counties, and states throughout the world to call on their federal and national governments to support the TPNW; now, therefore,

THEREFORE, BE IT RESOLVED