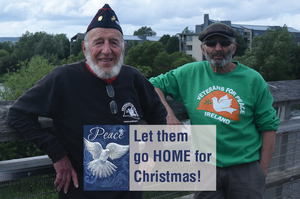 Tarak Kauff and Ken Mayers, members of Veterans for Peace are trapped in Ireland, unable to return home due to criminal charges pending against them for protesting the U.S. violation of Ireland's neutrality at Shannon Airport.

They have launched "Home By Christmas", a postcard campaign aimed at the Justice Minister asking them to let Ken and Tarak be allowed to leave the country.  If you are interested in some postcards, please contact Ellen Davidson: ellen.davidson@verizon.net  You can stay updated on Tarak and Ken's case at Stop These Wars.

Veterans For Peace President Gerry Condon recently sent the below letter in support of Ken and Tarak:

I am writing to you on behalf of Veterans For Peace in the United States.  We are a 34-year-old organization with chapters in over 100 U.S. cities and a growing number of international affiliates, including in Ireland.  Our mission is ultimately to abolish war altogether.  In the meantime, we work to expose the true costs of war, to seek justice for veterans and victims of war, to abolish nuclear weapons, and to restrain our government(s) from intervening in the internal affairs of other nations.

As you must know, two U.S. members of Veterans For Peace, Ken Mayers and Tarak Kauff, were arrested in Ireland on St. Patrick’s Day of this year after walking on to the tarmac at Shannon Airport with a banner protesting the misuse of this civilian airport in neutral Ireland by the U.S. military and CIA on their way to and from illegal wars and occupations in Afghanistan and the Middle East.

These two peace activists are charged with misdemeanor offenses and yet they have been treated as dangerous criminals.  They spent 13 days in an Irish jail.  They are not being afforded a speedy trial.  Their U.S. passports have been seized by Irish authorities.  For over seven months they have not been allowed to leave Ireland and return to their families in the United States.

As Minister of Justice, you must know that this amounts to cruel and unusual punishment for two men who have not been convicted of any crime.  The rationalization that there is a risk they would not return to Ireland for their trial does not make any sense at all – these are nonviolent peace activists who very much look forward to their day in court.

It is apparent that these U.S. military veterans are not victims of incompetent Irish authorities, but rather are being held hostage for political reasons.  This is unacceptable, and may require the intercession of international human rights organizations and/or international courts of justice.

As an Irish American who loves Ireland, I can think of worse fates than being forced to remain in Ireland for an extended period.  In fact, Ken Mayers and Tarak Kauff have enjoyed the warm hospitality and support of many wonderful Irish citizens who share their concerns about the U.S. abuse of Irish neutrality. However, I am sure you can appreciate that these two men – who are 77 and 82 years of age – have lives, families and responsibilities at home in their respective communities in New Mexico and New York.

The denial of their freedom to travel home, combined with the denial of a speedy trial, amount to an outrageous breach of justice — hardly what people expect from the government of Ireland.

If the purpose of their extended detention in Ireland is to discourage U.S. citizens from daring to protest for peace in Ireland, I think that message has been received.  As this detention continues, however, you may find that it will have just the opposite effect.  Many U.S. veterans are shocked and outraged by the behavior of the Irish government.

As president of Veterans For Peace, I appeal to your better sense as an Irish citizen and as Minister of Justice.  Please take a close look at this situation.  I am sure that Messrs. Mayers and Kauff would be more than happy to meet with you and answer any questions you might have.

Let me state clearly that Veterans For Peace is calling on Irish authorities to return their U.S. passports and restore their freedom to travel home to the United States.

These dedicated peace activists have been clear and convincing in their commitment to return to Ireland when a trial date is finally set.  To punish them ahead of their trial – or instead of giving them a fair trial – is a violation of Irish law and international law.

Thank you for your attention to this matter, Minister Flanagan.  I hope that Ireland is still sufficiently neutral that you are able to do the right thing.  The peoples of both our countries will be pleased if you do.

For Peace and Neutrality!
Gerry Condon, President
VETERANS FOR PEACE

See the letter in PDF

Gerry Condon also gave an excellent interview to John Kiriakou on his radio show Loud and Clear. Gerry talked about his recent letter to Minister Flanagan, hitting many important points about Irish neutrality and U.S. militarism, as well as suppression of protest. Click here for Gerry’s interview.