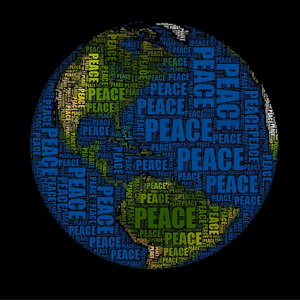 "If you want peace, prepare for war." This saying, which goes back at least to the Romans, governs most thinking about peace and war today. Not for nothing has it been adopted as their slogan by a score of regiments in the US military. But it raises deep doubts. Can preparing for war bring about anything but a truce, and not real peace? We who believe in principled nonviolence hold that we can achieve genuine peace only by peaceful methods: means are not dissociable from ends. The world has always been preparing for war, and it has always gotten what it has been preparing for.

There may well be times when, for example, a limited military intervention might prevent or stop imminent genocide. Armed "peacekeepers" may be necessary sometimes to give an opportunity for the real work of peacemaking and peacebuilding to go forward, without which there can be no lasting peace. Working for the real thing does not require us to be absolute pacifists.

But one great danger of "preparing" for war in the name of peace is that what one country believes is entirely defensive may well appear to another country as aggressive. The arms race that led to World War I is the great example, but more recently we saw in the Strategic Defense Initiative (SDI) a similar two-faced program. Missiles would be placed in orbit around the earth to destroy incoming missiles; that sounds defensive enough. But if a country were to have such a "defensive" system in good working order, it could also launch a first strike on enemy weapons and not worry about retaliation. Coupled with the MX and Trident D-5 missiles targeted on Soviet ICBM silos, it looked to the Soviets as an offensive weapon.

The absence of war is only a partial condition for the existence of authentic peace. The presence of social justice, goodwill, cooperation, and harmony is also required. The mere absence of war is really only a lull between wars as indicated in the phrase, "wars (or weapons) of the future." Real peace also includes the presence of disagreement because, without disagreement, there can be no change. It is how a dispute is resolved and reconciled that qualifies it as a peaceful process. A situation in which win-win outcomes occur as a result of civil discourse, mutual respect, problem-solving, and a genuine desire by all parties to come to a mutually agreeable outcome is a precursor to the peaceful resolution of disputes. When hostilities are imminent or in progress, their prevention or cessation can be ensured by an enforcement mechanism comparable to the current UN Peacekeeping Force represented by the militaries of member countries. In other words, a peacekeeping armed force will likely be needed to help stop hostilities before peacemaking and peacebuilding can ensue. Otherwise, there will be little incentive for those who are committing genocide, for example, to stop the killing.

Eight out of ten casualties in war are civilians and most of these are children. Civilians are increasingly becoming targets in contemporary wars. In addition to killing millions of people (about 60 million in WWII alone), war wastes resources, pollutes the environment, displaces large numbers of people, destroys homes and precious works of art and architecture, and creates large numbers of people with severe wounds and mental disorders such as PTSD. Dwight D. Eisenhower, former Army general and president, regarding the terrible waste of war, said that

Every gun that is made, every warship launched, every rocket fired, signifies, in the Final sense, a theft from those who hunger and are not fed, those who are cold and not clothed. This world in arms is not spending money alone; it is spending the sweat of its laborers, the genius of its scientists, and the hopes of its children (6-17-61)

It is time to look at strength through peace and redefine national security to include healthcare for all, affordable education, low crime, a clean environment, high employment, affordable childcare, good public transportation, and adequate housing. If national security is limited to spending huge amounts of money for defense and little for social needs, what is there left to defend?

Tragically about 152,000 Vietnam combat veterans committed suicide after the war – three times more than those killed directly in the war (How Many Vets, 1991). The suicide rates of combat soldiers in Iraq and Afghanistan continue to rise. War also sets the stage for more wars as the case of WWI aptly illustrates: Germany was defeated and excessively punished (1918)—only to rebuild and attack the victors yet again 20 years later (WWII).

One of the biggest obstacles to peace is absolute sovereignty where the nation state is the highest authority. This could be aptly called a wild west show. This enables any country to arm to the teeth and wage war at will without any international oversight or enforcement. Nazi Germany, the United States, and the former Soviet Union are good examples of this. The United States alone has 800 bases spread around the world. Ironically, the Federalist system used in the United States is an excellent model of one that could be used world-wide. For example, in the Northeast part of the United States, two states, New Hampshire and Maine, have had a long running dispute about ownership of a shipyard on the border. These two states wouldn't even think of going to war over this because the federal government not only forbids it but also would take swift action to stop it. Prior to federalization, war between these states would have at least been a strong possibility. In fact, the thirteen colonies were on the verge of war and economic demise—hence the replacement of the Articles of Confederation with a Federal Constitution (1787).

On May 16, 1963, the governor of Alabama used the National Guard to block entrance to the University of Alabama to two African-American students. President John F. Kennedy subsequently federalized the National Guard, thereby allowing the students to enter. In this case, when states' rights violated the U.S. Bill of Rights, the federalist system was activated. The idea of having a federalist system to govern the world lies within the realm of possibility but the will to do it must be developed because vested national interests are powerful inhibitors of international cooperation, just as adoption of the U.S. Constitution faced stiff opposition. Nevertheless, the European Union is a poignant example of formerly warring states forming a cooperative relationship and one important step toward a wider net of world cooperation.

International federalism is especially important in the post-WWII nuclear age. This is implied in Article VI of the 1970 Nuclear Non-Proliferation Treaty requiring the nuclear weapon member nations (the UN Security Council's "permanent five"-- US, Russia, China, France and Britain; the other 185 members had access to nuclear power for peaceful uses only) to work together to rid the world of nuclear weapons through

... negotiations in good faith on effective measures relating to cessation of the nuclear arms race at an early date and to nuclear disarmament, and on a treaty on general and complete disarmament under strict and effective international control (Nuclear Disarmament, 2018)

As long as states/nations focus on their own self-interest and not on the common good, strict and effective international control and peace in the nuclear age will not be possible. The earlier 1955 Russell-Einstein Manifesto (a plea to world leaders and the international scientific community to abolish war and nuclear weapons for the sake of humankind's continued existence) was really an eye opener for many, especially the nuclear super powers (USSR and US). It made clear not only the rational choice we have before us, but also our common humanity and the need for its preservation.

There lies before us, if we choose, continual progress in happiness, knowledge, andwisdom. Shall we, instead, choose death, because we cannot forget our quarrels? We appeal as human beings to human beings: Remember your humanity, and forget the rest. If you can do so, the way lies open to a new Paradise; if you cannot, there lies before you the risk of universal death (Pugwash,1955).

Under world federalism, (not absolute world government) nation states would enjoy relative sovereignty in most areas except those decided upon by international consensus such as human rights, war, and environmental issues – issues that often impact other states. For example, if a state creates an inordinate amount of pollution, that pollution is not confined to the borders of that state. Thus, no state has the right to negatively impact other states, and consequences for such actions should occur. Thus, the Federalist Union would have its own International Guard with recruitment open to all world citizens unlike the current U.N. Peacekeeping force the soldiers of which wear the uniforms of the militaries of their respective countries with the exception of blue UN helmets. This force would be independent of countries and answer only to the Federalist Union. If this force were to intervene in a country of which a soldier is a citizen, that soldier would be exempt from that intervention.

Another important strategy to develop authentic peace is to provide the children of the world with peace education, the content of which includes human and animal rights, nonviolence, conflict resolution/diplomacy, ecological well-being, and the causes and prevention of war among other topics. Schools readily teach young people to be soldiers through the Junior Reserve Officer Training Corps (JROTC) but few if any have peace studies programs that teach people how to get along with others and help transform themselves and the world through proactive means. Peace studies programs have the potential to develop citizens who care about and serve their communities as well as to extend that care and service to the entire planet. Both patriotism and cosmopolitanism can coexist by taking one's love of country and extending it to the entire planet. In addition, Robert Muller's (former Chancellor of the University of Peace and the "father of global education") World Core Curriculum (1998) would be an excellent context within which peace studies could be taught. Muller was inspired by U Thant, former Secretary-General of the United Nations, who said that "the world will not change and find peace if there is not a new education" (The Positive Encourager). Consequently, Muller

explored how to create a form of education that enabled children to appreciate the wonder of life. Such an education must start from the big picture, but then move on to being very practical right down, for example to studying the constituents of the cells that give us life (The Positive Encourager)

While this essay on peace and war is not meant to be inclusive of all the ways that authentic peace could be achieved, world federalism and peace studies could be significant ways of attaining it. Major systemic changes in education, economics, government, criminal justice, and public policy must also occur because the problem of war cannot be solved without comprehensive transformation of self and society. Nor will it occur overnight. It will happen through the completion of short-term objectives. If war is to be abolished, an informed, peaceful, socially just, and well-educated citizenry in every country in the world would be an important step to creating awareness and a level of moral development that will energize people to be proactive pursuers of world peace. If we can think it, we can say it, and if we can say it, we can do it. As A.J. Muste once said, "there is no way to peace; peace is the way" (1967).

(Note: I would like to thank Michael Ferber, Marcia D. Mundt, Raymond Perkins, and John Willis for helping me polish this statement.)