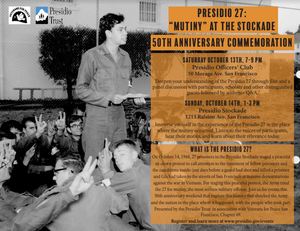 Fifty years ago this October, the Presidio Stockade at Fort Winfield Scott was the site of the Presidio 27 Mutiny, a defining moment in the growing movement against the war in Vietnam. On October 14, 1968, 27 prisoners in the stockade staged a peaceful protest, reading their list of demands against harsh conditions in the jail and singing We Shall Overcome. For this they were tried for mutiny, the most serious military offense. In the days prior, a guard had shot and killed a prisoner and a massive anti-war demonstration had come right up to the Presidio’s gates, the first organized by GIs and veterans nationwide. To commemorate this pivotal time in our history, the Presidio Trust presents two public programs which illuminate the “mutiny,” the context from which it grew, and its significance today. A showing of rare film clips documenting this story followed by a panel discussion October 13 and an immersive experience and re-enactment at the former stockade on October 14, invite visitors to hear first-hand accounts from the original Presidio 27 soldier activists, their defense attorneys, filmmakers, scholars and historians as they share personal stories and stimulate discussion on such relevant contemporary themes such as a divided nation, dissent, and non-violence.

The Saturday, October 13 Forum will be from 7 to 9:30 pm at the Presidio Officers' Club, 50 Moraga Avenue, The Presidio, San Francisco
Date: Saturday, October 13
Time: 7 pm to 9 pm
Place: Presidio Officers’ Club, 50 Moraga Avenue, San Francisco
Price: FREE
On October 14, 1968, 50 years ago, in a country increasingly divided over the Vietnam War, 27 inmates in the Presidio Stockade staged a peaceful sit-down protest after a fellow prisoner was shot and killed by a guard. For this action, that called attention to the treatment of fellow prisoners and the conditions inside, the Presidio 27 were tried for mutiny, the most serious military offense. A panel discussion followed by audience Q&A, will dive deeper into the history of the Presidio 27 and their contemporary relevance. Presidio Trust Historian, Barbara Berglund Sokolov, will moderate a conversation with panelists David Cortright (Director of Policy Studies at the Kroc Institute for International Peace Studies at the University of Notre Dame and author of Soldiers in Revolt: GI Resistance During the Vietnam War); Jeff Patterson (of Courage to Resist, first service member to refuse to fight in Iraq); Randy Rowland (one of the Presidio 27); Susan Schnall (Navy nurse court-martialed for her actions against the Vietnam War); and Brendan Sullivan (Army defense attorney for the Presidio 27). Presented in association with Veterans For Peace San Francisco, Chapter 69.

The Sunday October 14 event will be at the stockade located in Fort Winfield Scott from 1 to 3 pm, starting with songs from Country Joe McDonald.

Two of the original instigators, Keith Mather and Randy Rowland, and others, will be presenting during both events. This promises to be an interesting and enlightening event. Note the number of fascinating speakers.

History of the "Mutiny" at the Stockade
On October 14, 1968, 27 prisoners in the Presidio Stockade broke ranks during roll call formation, sat down in a circle in the grassy yard, joined arms, sang We Shall Overcome, and asked to present a list of demands to the stockade commander that addressed the treatment of fellow prisoners and the conditions inside. The 27 also called for an end to the harassment of Black prisoners and many expressed their opposition to the Vietnam War. Just days before a guard had shot and killed a prisoner and GIs had taken to the streets of San Francisco in massive demonstrations against the war that came right up to the Presidio's gates—the first anti-war marches organized by GIs and veterans in the nation. For staging this peaceful protest, amidst the heightened tensions of a country increasingly divided over the Vietnam War, the Army tried the 27 for mutiny, the most serious military offense. The actions of the 27 and their subsequent trials made headlines, shocked the Army and the nation, brought the GI movement onto the national stage, inspired the anti-war movement, catalyzed improvements in U.S. military prisons around the world, and ultimately helped to end the Vietnam War.

In 1968, as more and more soldiers began questioning the Vietnam War, going AWOL (absent without leave) and deserting the military, many flocked to San Francisco's counterculture. Those who turned themselves in or were picked up by authorities, were brought to the Presidio, the nearest Army post, and held in the Stockade. As its population swelled to nearly twice what it was designed to hold, stockade conditions became increasingly chaotic and overcrowded, a ticking time bomb. The average age of the Presidio 27 was nineteen and all were AWOL's. Most were from working-class backgrounds, some came from career military families, and only five had finished high school. Their convictions for mutiny came with sentences ranging from six months to sixteen years. Years later, and only after great personal hardship and sacrifice, including years spent in federal prison, the military overturned their convictions on appeal and reduced their sentences. In the end, the appeals judge found that rather than intending to usurp or override lawful military authority, requirements for the charge of mutiny, the Presidio 27, in reading their demands to their commanding officers, were actually invoking and imploring the very military authority they had been charged with seeking to override.