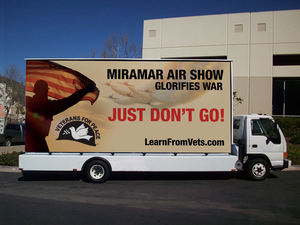 As part of its ongoing five year educational "Just Don't Go" outreach program, the San Diego Veterans For Peace have obtained a mobile billboard which will be driving around greater San Diego for the next week. Watch for it !

The press and public are encouraged to stop by and check out this mobile billboard on Thursday, September 20th, 2018 from 4-6 PM on the Carroll Canyon Road overpass along the I-15. Veterans of all services will be there for interviews and to discuss the five year educational outreach program encouraging people to stay home from the annual Miramar Air Show. The press may contact USAF Veteran Dave Patterson at 760-207-9139 or dpatterson998@yahoo. com for more information.

The San Diego Chapter of the Veterans For Peace, an international organization comprised of veterans and supporters dedicated to the non-violent pursuit of peace and to the exposure of the true costs of war, is entering the final week of its campaign to elevate the conversation surrounding the Miramar Air Show by sponsoring a mobile billboard to travel the streets of San Diego with the message: "Miramar Air Show Glorifies War; Just Don't Go!" and ends with our website www.LearnFromVets.com. Go to this website and see a short video about the Air Show.

Military spending is out of control and the Pentagon has NEVER been audited. These funds could be better spent on programs that help our citizens- education, health and infrastructure, and not on implements of destruction and war. Since the Air Show is a highly visible symbol of militarism in San Diego we are bringing attention to this icon that represents: unaccounted spending by the military, unnecessary risks to pilots and spectators for entertainment purposes, shameless and misleading recruiting of our youth and the glorification of war.

So, "Just Don't Go". Better yet, engage in a dialogue with your neighbors, friends, and elected officials about HOW our tax dollars are being spent. Shouldn't we assist our own citizens here at home instead of creating orphans and refugees throughout the rest of the world?