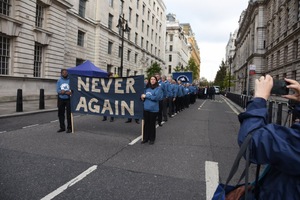 by Will Thomas, Coordinator, NH VFP (A. J. Muste Chapter)

It was with great pleasure that this “Yank” joined others who attended the 2016 Annual Gathering of the VFP UK in November at the Friends House in London.  The atmosphere was warm and gracious, and the members of this organization should be commended for their crucially important work in informing and educating the average UK citizen of the deadly cost of militarism and its harmful effect on their society.  “Never Again” is their message as it should be noted that just like in the US, UK military recruiters prey upon the young and vulnerable to support imperialistic adventures and participate in illegal, immoral and unjust occupations of foreign lands.  Meeting in the George Fox Room, there were chapters from all over the UK including Birmingham, Bristol, York and especially London.  Part of their Statement of Intent declares that “the UK is a prime driver of war in the world.”

It was especially moving on “Remembrance Day, November 13, to join such determined men and women in their silent procession to lay a wreath of white poppies with the word “Peace” inscribed on each one.    There were many units, mostly military, with some bands performing, along with the “Boys Brigade” which is the equivalent of the “JROTC” in the US, and the “Sea Cadets” which Chris from Birmingham said he was “allowed” to join at the age of 11!   All marched to Britain’s War Memorial, the Cenotaph, where each group placed its wreath of red poppies at the base of the monument. In Britain, the red poppy is used to honor the “Glorious Dead.”  Others see the red poppy as discounting the cost of war and the militarism it promotes.  Being placed last in the procession, the VFP members, 65 strong, marched silently to the memorial where the youngest member, Afghan veteran Wayne Sharrocks, placed the wreath of homemade crocheted white poppies as a stark contrast to the others.

After the placement, WW II vet Jim Radford sang a song called “1916,” which was followed by Ross DeFreitas reciting the poem “Suicide in the Trenches” by Wilfred Owen.  Finally, Mic Haggerty played “The Last Post” on a bugle.  After a moment of silence, Mic finished with “Reveille.”  As the VFP UK and some VFP US veterans walked back in silence, the remaining crowd of people applauded the group with enthusiasm.  It appeared they were endorsing the message of “No More War – Never Again.”

Perhaps citizens of both the US and the UK ought to read the poem by WW I soldier Wilfred Owen entitled “Dulce Et Decorum Est: Pro Patria Mori,” in which he describes the horrors of war and its ugly ways of dying.  Translated, the poem states, “It is sweet and seemly to die for one’s country.”  No, it is not, as VFP UK demonstrated through its participation on the day that the UK commemorates its fallen.