Each year, the commemoration of the life of Dr. Martin Luther King, Jr.  provides Veterans For Peace and the broader peace movement an opportunity to reflect on  the ways that we are carrying on his legacy.  Peace, social justice and King’s legacy come together as VFP continues to advance our Peace at Home, Peace Abroad lens by addressing the Triple Evils of War, Poverty and Militarism - and today we include environmental destruction, to build an all inclusive peace and justice movement. .

This MLK weekend, we reflect on what King’s legacy and the movement that he was a part of mean for us at this moment in history. Dr. King's memory has been largely sanitized in mainstream American culture, with some of his most revolutionary thoughts and words all but wiped from the pages of popular history. Rarely do we hear of his anti-war stance, his work to end poverty or his full vision of racial justice. At this historic moment, when the country continues to be in such turmoil, key civil rights are being rolled back, hate, open racism and misogyny is on the rise and immigrants are under attack, there continues to be a national call to reclaim MLK's legacy, and remind the world that his vision was larger than what they've been told to imagine, and that it remains unfulfilled.

When conditions become unbearable, resistance rises.  Today is no exception.  There are many good campaigns to support that honor Dr. King’s Legacy. People all over the country and the globe are fighting to protect their rights, access to their indigenous lands, the ability to travel without walls and religious bans, to maintain their human dignity and to end war.

This weekend we urge all of our members to remember Dr. King by taking action, whether it be by attending a local march, reading MLK’s Beyond Vietnam speech, supporting those working on the border or getting involved with the Poor People’s Campaign.

We know that the “arc of the universe is long, but it bends toward justice” and together we continue to bend that arc. 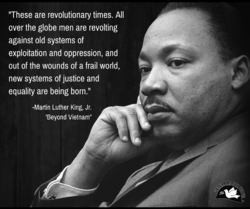 Reflection of VFP members on the Legacy of Dr. King

A Breeze of Change is Coming, 50 Years Later by Miles Megaciph

Why We March by Michael McPhearson (2017)

The Legacy of Dr. King and the Peace Movement by Margaret Stevens

Martin Luther King Jr was a radical. We must not sterilize his legacy by Cornell West

The Last March of Martin Luther King Jr. (published in the Atlantic)