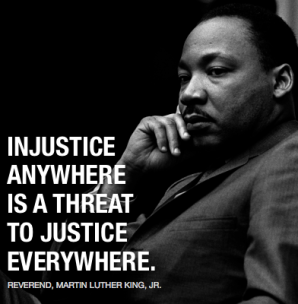 Today, I am participating in a Martin Luther King Jr. commemoration march with the Seattle Chapter of Veterans For Peace. Next Saturday I will be Washington DC to participate in the Women’s March. I have participated in many actions in solidarity with my sisters and women elders. The events that stand out for me are the 2001 “Zap Action for Women’s Lives in DC,” which brought out about 30,000 people, the April 2004 March for Women’s Lives which drew over a million people to DC and a small but very vibrant gathering in Trenton NJ called United Against the War on Women where I had the honor to talk about the tragic subject of how shooting wars destroy women’s lives.

If one believes in the message of equality and justice preached by Dr. Martin Luther King Jr., you must also support the struggle for Women’s rights. When Dr. King called for people to be judged by the content of their character, he did not mean only in juxtaposition to the color of skin. No, that would make the argument weak and variable. He was calling for recognition of each person’s humanity and for each of us to be measured by who we are as an individual, not by our “race,” gender, sex, nationality and a whole host of variables that make up the incredible mosaic of the human family. One cannot be a true advocate of human rights if the you do not stand up for the struggle of women’s rights.

This truth was clear to many advocates for the rights of women and Black people more than a century ago. It was possibly made most clear by slavery abolitionist and women’s rights activists Sojourner Truth. Born into slavery, she faced the dual oppressive burden of racism and sexism; the same circumstance Black women find themselves in today. In 1851, Truth attended the Ohio Women’s Rights Convention in Akron where she delivered what is now known as the “Ain’t I a Woman?” speech, demanding equal rights for women and Black people.  The actual content of the speech and whether she really said, “Ain’t I a woman?” is contested, but there is no doubt that her words had a huge impact on people’s thinking and set down the understanding that one cannot fully work for the rights of women or Black people separately. They are inextricably intertwined and Truth was an in the flesh example and advocate of that truth. If she asked the question or not, the truth in the obvious answer – yes, to the question is why the legend or truth of it endures. Of course, Truth went on to carry that message to the public the rest of her life speaking before hundreds of gatherings. She had a profound impact on our society.  In 2014 she was included in Smithsonian magazine’s list of 100 Most Significant Americans of All Time.

Truth was bold and creative. For example, in 1858 someone interrupted a speech and accused her of being a man. She opened her blouse and revealed her breasts. Wow!

From the beginning of the U.S. women’s right movement, the ground work to uncover the connections between the rights of Black people and women was laid.  In 1840, Elizabeth Caddy Stanton and Lucretia Mott attended the World Anti-Slavery Convention in London. Both were barred from the convention floor. This indignation aroused in them the motivation to organize women to demand their rights and recognition as full human beings capable of determining their future and wellbeing.  In 1848 the two women with Martha Wright, Mary Ann McClintock, and Jane Hunt organized the now well-known Seneca Falls Convention, formally kicking of the U.S. women’s rights movement. On July 19th, the first day of the convention, Stanton read a treatise she had written called the “Declaration of Sentiments and Grievances.” Stanton’s piece followed closely the Declaration of Independence. I am struck by how the meaning of the preamble of the Constitution is profoundly changed by simply adding the word women to, “We hold these truths to be self-evident: that all men and women are created equal; that they are endowed by their Creator with certain inalienable rights…” The Declaration of Sentiments and Grievances then detailed the injustices inflicted upon women in the United States and called upon them to organize and petition for their rights.

Men were invited to attend the second day. One of the men asked by McClintock was famed orator and abolitionist Frederick Douglass. During the convention, twelve resolutions calling for specific equal rights for women passed, all but one unanimously. The resolution that caused the most discussion called for the enfranchisement of women. But after lengthy debate in which Douglass sided with Stanton’s argument for enfranchisement, the resolution passed.

Douglass remained a lifelong advocate for the rights of women. In fact, forty years later he was asked to address the International Council of Women in Washington, D.C. In his remarks, Douglass recalled his role at the Seneca Falls convention and insisted that women rather than men should be the primary spokespersons for the movement. Men today can take a lesson from Douglass, for in his remarks he explained that he was called on to speak and shall obey, but…. ”Men have very little business here as speakers, anyhow; and if they come here at all they should take back benches and wrap themselves in silence. For this is an International Council, not of men, but of women, and woman should have all the say in it.”

Unfortunately, today we have national leaders who want us to hate people both at home and abroad. They are leading us down a path of internal domestic division and more international conflict. They are attempting to normalize bigotry, racism, religious intolerance and misogyny under the rubric of ending political correctness and taking back America. As we celebrate the life of Dr. King, one of our nation’s greatest citizens, we must pledge to follow his lead and of those upon which shoulders he stood. For without people like Truth or Douglass there would be no King. All three called on us to stand together, recognize the rights of all people and demand protection of those rights. We must believe peace is possible both at home and abroad and we must strategize, resist and build together to make it so. Today is a good place to begin to uncover those connections and take the message of unity, peace and justice with you as you march in solidarity in Washington or the local Women's’ March near you.