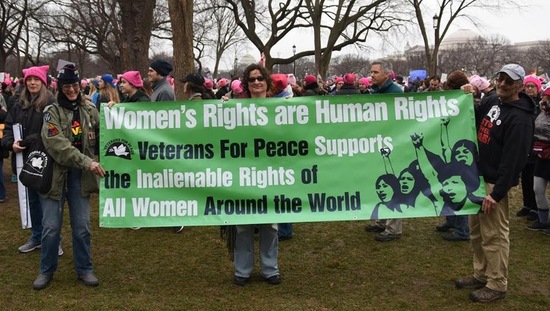 Did you or your chapter march?  Upload pictures here!

Hundreds of Veterans For Peace members attended marches all over the country on Saturday January 21st. In D.C., VFP marched in a contingent of progressive veteran and military family groups, including: IVAW, MFSO, Common Defense, Beyond the Choir and Black Knights Men's Choir.

The rhetoric of the past election cycle has insulted, demonized, and threatened many --women, immigrants of all statuses, those with diverse religious faiths particularly Muslim, people who identify as LGBTQIA, Native and Indigenous people, Black and Brown people, people with disabilities, the economically impoverished and survivors of sexual assault. We are confronted with the question of how to move forward in the face of national and international concern and fear.

A central part of the mission of Veterans For Peace is make visible the cost of war.  The U.S. military has an epidemic of military sexual trauma. Veterans Affairs report that 1 in 4 women  respond "yes," that they experienced MST, when screened by their VA provider.  Keep in mind these numbers only reflect women who have chosen to report sexual assault and harassment.

Women and girls in particular experience conflict and displacement in different ways from men because of the gender division of roles and responsibilities. The targeting of women and girls by armed forces further exacerbates the situation. Examples of such targeting and gender-based inequity leading to higher mortality and morbidity (illness) among females during armed conflict include: violence against girls and women, including rape and sexual slavery; hunger and exploitation when men take control of food distribution; malnutrition, when food aid neglects women's and children's special nutritional requirements; and culturally inappropriate and/or inadequate access to health services.

Check out Ellen Davidson's pictures of the Washington D.C. march

Did your local media feature (or snap a photo) of VFP members at marches in your city?  Email Colleen!