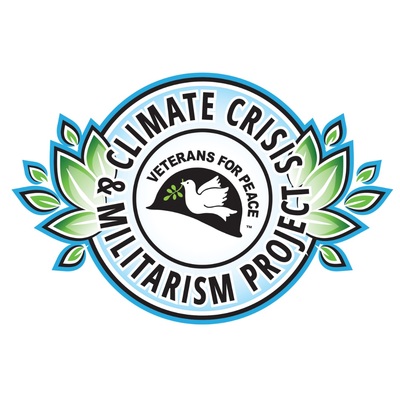 If COP26 is the "last best hope for the world" as Climate Envoy John Kerry stated, the USA is largely responsible for the failure to achieve that "hope." President Biden says the USA is "... leading by the power of our example". The Veterans For Peace Climate Crisis & Militarism Project (CCMP) believes that the USA's poor "example" led to the half-measures achieved at COP26.

In his address at COP26, President Biden stated the climate crisis poses "...the existential threat to human existence as we know it." Unfortunately, the actions of the Biden administration are not just inadequate, they are counterproductive. How can other countries trust the intentions of the U.S. government to prioritize a meaningful response to climate change when the U.S. expends vast resources on maintaining its global military dominance? Without the trust of other nations, the USA cannot expect international cooperation in what should be a shared effort to meaningfully address the climate crisis.

Although CCMP holds the U.S. is largely responsible for the inadequate results from COP26, we realize other countries also bear some responsibility. Wealthy countries, including the U.S., went into the COP having failed to fulfill their pledge of $100 billion in climate finance to developing nations by 2020 even after a year of unprecedented climate-change-exacerbated extreme weather events (heat domes, flooding, droughts, etc.). And after COP26, there is still not enough money pledged to the developing countries. Oil-rich Saudi Arabia and other Gulf States are not included in the donor groups despite contributing massively to the climate crisis. In addition, COP26 failed to secure a new stream of funding for Loss and Damage to vulnerable countries.

On a positive note, CCMP is cautiously encouraged by the US-China Joint Glasgow Declaration on Enhancing Climate Action in the 2020s, which states it is based on following the science and building on diplomatic efforts from last spring between Climate Envoy John Kerry and his counterparts in the Chinese government.

CCMP greatly appreciates the huge, intersectional, and relentless activism outside and occasionally inside the COP, with daily actions and marches, including the November 6 Global Day of Action for Climate Justice that turned out 100,000 in the streets of Glasgow. We especially praise the efforts of the COP26 Coalition, which hosted over 30 events focusing on the previously taboo subject of the role of militarism contributing to the climate crisis.

CCMP understands the Biden Administration and U.S. Congress cannot pivot from decades of pursuing global military dominance to seriously addressing the climate crisis without political support from the American people. Consequently, going forward we plan to support efforts, such as Congresswoman Barbara Lee's (CA-13) resolution H. Res. 767, which calls for the monitoring and reducing the carbon footprint of the U.S. military. We in CCMP will continue our programs of public education and advocacy, online and in person. By highlighting the emissions of the single largest institutional source of greenhouse gas emissions on the planet, CCMP will enlist allies in support of reprioritizing resources to defend against the real threat to USA's security, the climate crisis.