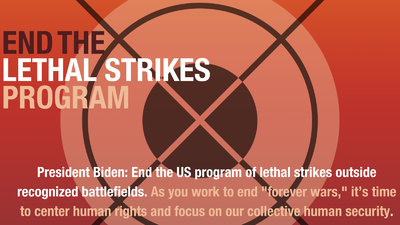 WASHINGTON — Today, 113 organizations from the United States and around the world sent a letter to President Biden calling for an end to the U.S. program of lethal strikes outside recognized battlefields, including through the use of drones. The groups' focus varies from: human rights; civil rights and civil liberties; racial, social, and environmental justice; humanitarian approaches to foreign policy; faith-based initiatives; peacebuilding; government accountability; veterans' issues; and the protection of civilians.

"Successive presidents have now claimed the unilateral power to authorize secretive extrajudicial killing outside any recognized battlefield, with no meaningful accountability for wrongful deaths and civilian lives lost and injured," reads the letter, which was signed by organizations based in the United States as well as in countries impacted by the program, including Yemen, Somalia, and Pakistan. "This program is a centerpiece of the United States' forever wars and has exacted an appalling toll on Muslim, Brown, and Black communities in multiple parts of the world. Twenty years into a war-based approach that has undermined and violated fundamental rights, we urge you to abandon it and embrace an approach that advances our collective human security."

The letter calls on the Biden administration to use its ongoing review of the program, as well as the upcoming 20th anniversary of 9/11, as an opportunity to disavow and end the lethal strikes program for good. Read the letter in full here. 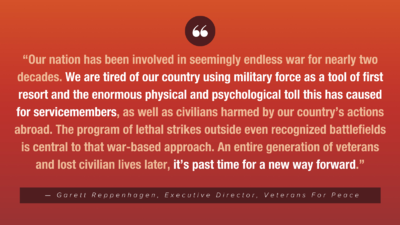 Below are statements from signatories:

"Our nation has been involved in seemingly endless war for nearly two decades. We are tired of our country using military force as a tool of first resort and the enormous physical and psychological toll this has caused for servicemembers, as well as civilians harmed by our country's actions abroad. The program of lethal strikes outside even recognized battlefields is central to that war-based approach. An entire generation of veterans and lost civilian lives later, it's past time for a new way forward."
— Garett Reppenhagen, Executive Director, Veterans For Peace

"The U.S. has been killing people for nearly 20 years in Yemen, but to this day it has not adequately investigated civilian deaths and injuries, or clearly recognized the severe harm caused to families and communities. The Biden administration should break with these damaging practices, and ensure thorough investigation and accountability for harms that have occurred."
— Radhya al-Mutawakel, Chairperson, Mwatana for Human Rights, Yemen

"Young people urgently want a livable, peaceful future — not forever wars that degrade our planet, harm Muslim, Brown, and Black communities around the world, and divert attention and resources from existential challenges like climate change. If President Biden is serious about investing in our future and our rights, he must end this lethal program and decades of war-based approaches, and chart a path forward that protects our collective human and environmental security."
— Ellen Sciales, Communications Director, Sunrise Movement

"Because we are all God's children, the decision to take a life is morally perilous. And, if it is ever justifiable, it must truly be a last resort. Unfortunately, two decades of drone strikes and other lethal acts, often carried out well away from any recognized battlefield, show that rather than using lethal force as a last resort, killing has instead become our government's default approach to perceived threats. President Biden must end the policy of using drone strikes and other lethal strikes in order to preemptively address possible threats. Two decades of killing is two decades too many."
— Rev. Jimmie Hawkins, Director, Presbyterian Church U.S.A. Office of Public Witness

"That such a large and diverse set of groups signed this letter shows there's widespread support for President Biden to end the harmful U.S. program of lethal strikes outside recognized battlefields. For too long, successive presidents have flouted the rights-protecting safeguards of international law and the U.S. system of checks and balances, with devastating consequences for lives and the rule of law. In following through on his promise to end forever wars, President Biden urgently needs to center rights, our collective human security, and adherence to domestic and international law."
— Hina Shamsi, Director, ACLU National Security Project

The letter is available online here