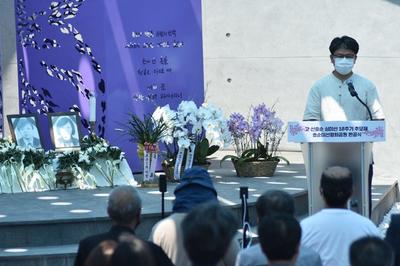 Concerned South Korean peace groups have finished and opened the Hyosoon-Miseon Peace Park recently, in memory of the two young Korean school girls crushed to death by a heavy U.S. armored vehicle that was travelling on the South Korean countryside road in 2002.

The opening ceremony took place on June 13, at the nearby site where the girls died (Gwangjerk-Ri, Yangju City, Gyonggi-Do). In connection with the ceremony, the VFP-Korea Peace Campaign sent an Open Letter to The Korean People, which was translated and read to the audience who attended the ceremony.

In our letter, Ann Wright, Coordinator of the KPC project congratulated the Korean volunteers who had worked so hard for many years to build the memorial Peace Park and expressed "our sincere apology to the surviving family members of Shin Hyosoon and Shim Miseon as well as other Korean people who have suffered much due to the many crimes that have been committed in Korea by the U.S. military in the past 75 years." (see the full text here)

Korea Peace Campaign project contributed $1,200 for the Peace Park project last year. Thanks to VFP members who had contributed to our donation fund in the past.

End the Endless Korean War!
Give Peace to the Korean People!