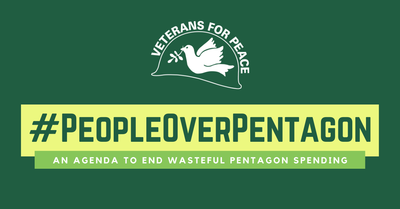 The exorbitant $738 billion annual military budget – more than 53% of the nation's discretionary budget – doesn't reflect any reasonable assessment of national security threats, commonsense priority setting, acknowledgment of the extraordinary waste in the Pentagon budget. The government is wasting hundreds of billions of dollars of taxpayer money, fueling endless war and diverting money from other vital needs. Pentagon spending is making America weaker as domestic and human needs are left severally underfunded.

"The U.S. soars above other nations in bloated military spending and openly exports its militarism at home and abroad. This blind devotion to war-making and propping up defense contractors must end," said Robert Weissman, President, Public Citizen. "Wasteful funding at the Pentagon should be immediately channeled to meet the urgent needs of our time, including healthcare for every American, investment in public health preparedness, and swift and effective action to prevent climate annihilation. Citizens deserve to see their taxpayer dollars invested in them rather than funneled down a military-industrial complex black hole."

Washington, D.C. – Today, Congresswoman Barbara Lee introduced a resolution calling for significant cuts to the Pentagon budget. Last year's $738 billion National Defense Authorization Act was the largest on record, coming at the expense of health care, education, infrastructure spending, and public health research. In the middle of a global pandemic, it's more clear than ever that wasteful spending on unnecessary and endless wars does not keep our country safe or healthy.

"For years, our government has failed to invest in programs that actually keep our country safe and healthy. The prioritization of defense spending and the underinvestment in public health has led to 10 times more deaths from COVID-19 than the wars in Iraq and Afghanistan. By over-prioritizing the Pentagon and military solutions, our country is drastically underprepared for any crisis that needs a non-military solution.

"We cannot continue to prioritize funding for a department known for its waste, fraud, abuse, and failure to pass an audit – especially when the money to 'protect national security' is failing to protect our most vulnerable citizens. Our foreign policy has been militarized to the point that we must repeatedly resort to military solutions for non-military problems.

"People expect Congress to focus on those threats most likely to harm them — not waste their money on expensive weapons designed for the wars of yesterday while the most potent threats to Americans struggle to attract funding. Redundant nuclear weapons, off-books spending accounts, and endless wars in the Middle East don't keep us safe.

"We all want to provide the best for our men and women in the armed services. And especially at a time when families across the country are struggling to pay the bills – including more than 16,000 military families on food stamps – we need to take a hard look at every dollar and reinvest in people. It's time to cut weapons of war and prioritize the well-being of our troops, anti-poverty programs, public health initiatives, and diplomacy.

"Congress needs to prioritize our safety and our future, not more war."

The full text of the resolution can be found here.