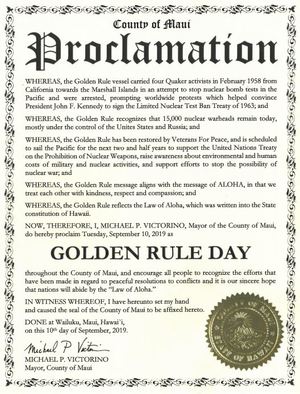 The proclamation, signed by Maui County Mayor Michael Victorino, made Tuesday the official “Golden Rule Day” across the county.

The proclamation says that the Golden Rule reflects the “Law of Aloha” and encourages “all people to recognize the efforts that have been made in regard to peaceful resolutions to conflicts.”

An excerpt from the article Golden Rule docks at Maalaea to spread anti-nuclear message originally published in the Maui News:

On the first leg of its current voyage, the Golden Rule arrived in Hilo Harbor on July 31 after a 25-day sail from San Diego. From Maui, the sailboat is to travel to Lanai, Molokai, Oahu and Kauai.

The voyage also will take the sailboat to the Marshall Islands, Guam and Okinawa. The ultimate goal is to reach Hiroshima by August 2020 for the 75th anniversary of the world’s first atomic bombing, she said.

“I strongly believe in that, and it’s a part of my practice and philosophy,” crew member James Akau said of the peace voyage.

Sailors Akau, Joe Scarola, Alex Franceschini, Keith Oney and Aaron Blackman are members of the Na Hoa Holomoku of Hawaii Yacht Club. They joined Jaccard on the first leg of the voyage.