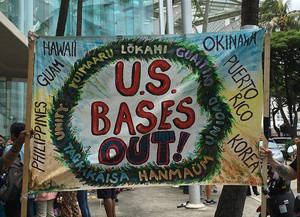 I was pleased to be one of the signatories calling for the Pentagon to be more transparent about its overseas bases.

The US has at least 800 military bases in foreign countries. By comparison, the rest of the world combined has less than 30 bases in foreign countries. There are also US special operations and CIA bases, so called “black sites”, that are notorious for torture, illegal detention, disregard for military, US and international law, and operated without civilian or congressional oversight.

It’s argued that these US bases are welcomed by the host nations, but in many nations, such as South Korea, Okinawa and Germany, large segments of the population, in some cases majorities, do not want the US bases.

Claims that the bases provide economic benefits greater than the absence of the bases would provide have been proven untrue by studies in Korea, Japan and Germany. In a conversation I recently had with a Polish citizen, I was informed the anger at the lack of benefits provided, as opposed to those that were promised, by the relatively recent establishment of US bases is beginning to coalesce.

The third major claim for the munificence of overseas US bases is that the mass US military presence brings stability. This, of course, is belied by the wars over the last thirty years throughout the Middle East, Ukraine, and the Balkans. Perhaps the most egregious example of the instability provided by US bases is in Africa where in the year prior to the establishment of the United States African Command (Africom), less than 20 terror attacks were recorded on the African continent. More than ten years after the establishment of Africom more than 2,000 terror attacks were recorded last year.

These overseas bases embody not just the infrastructure of the US Empire, but the worst aspects of the Empire’s illegality, immorality and harm.

The Overseas Base Realignment and Closure Coalition, “a group of military base experts from across the political spectrum,” is calling on Congress to mandate a reporting requirement on overseas bases. In a letter to the Senate and House Armed Services Committees, the group of experts says the information that the Department of Defense currently provides on the cost and location of overseas bases is very “limited” and the “data is frequently incomplete.” This lack of transparency, they write, has allowed the Pentagon to erroneously claim America’s empire of overseas military bases - some 800 installations in 70 or 80 countries around the world - only costs taxpayers $20 billion per year, even while more inclusive independent estimates go as high as $150 billion per year.

The undersigned represent a broad group of military analysts, scholars, advocates, and other military base experts from across the political spectrum who support closing U.S. military bases overseas. As a result of a forward deployment strategy that dates to the first years of the Cold War, the United States today maintains approximately 800 base sites in around 80 foreign countries. The rest of the world’s nations together have fewer than 80 foreign bases.

The signatories have different ideas about how many bases to close but find broad agreement about the following nine reasons to begin closing foreign bases and improve national and international security in the process:

Compared to closing domestic bases, closing overseas bases is easy. Presidents George H.W. Bush, Bill Clinton, and George W. Bush closed hundreds of unnecessary bases in Europe and Asia. The Trump administration can do the same. This would mean bringing home thousands of personnel and family members who would contribute to the domestic economy.

In the interest of national, global, and fiscal security, we urge President Trump and Secretary Mattis, supported by Congress, to begin a process to close bases overseas and relocate military personnel and families to domestic bases, where there is well-documented excess capacity.

Del Spurlock, Former General Counsel and Assistant Secretary of the US Army for Manpower
and Reserve Affairs

Lawrence B. Wilkerson, Colonel, US Army (Ret.)/Former Chief of Staff to Secretary of State Colin
Powell/Visiting Professor of Government and Public Policy, College of William and Mary

Ann Wright, Colonel US Army (Ret.)/Former Deputy Chief of Mission at the US Embassies in
Afghanistan, Sierra Leone, Micronesia, and Mongolia