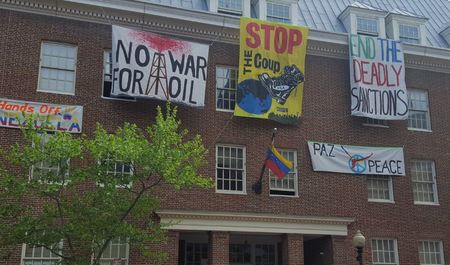 Right now, solidarity activists are occupying the Venezuelan embassy in Washington D.C. to prevent attempts by Guaido's opposition party to take over the building and then claim to be the "legitimate" government. Our action here can help put an end to US power plays in Venezuela, but our window will only grow smaller.
Veterans For Peace members Matt Hoh, Ken Ashe and Patrick McCann have all been at the embassy at various times and more are on their way.  Click here to watch a video of Matt outside the embassy where opposition supporters have been attempting to enter the Venezuelan embassy.
The activists protecting the Venzuelan embassy are part of the Embassy Protection Collective.  These activists have been hosting teach ins and educational events every evening for weeks.  They are asking for any and all supporters to come and support the protection.
If you are able to travel to D.C. and are a Veterans For Peace member, travel funds are available to you.  Please contact Gerry Condon for more information.  Email gerrycondon@veteransforpeace.org  If you are able to donate to these efforts, click here!
For those folks not in D.C., Veterans For Peace urges all members to participate in this call to action from About Face:

On Tuesday, opposition politician and self-appointed president of Venezuela Juan Guaido called for Venezeulan military leaders to stop defending President Maduro in an escalation of the attempted coup. While it is clear to us that the crisis in Venezuela continues to be devastating and in dire need of resolution, it is also clear to us that yet another coup supported by the United States will only lead to more disastrous outcomes.

That's why we have joined calls to end the sanctions on Venezuela (recently linked to 40,000 deaths in the country), and to resume diplomacy and foreclose the possibility of any military intervention by the US.

Fortunately there are options available to us to pressure our Congress members: H.R. 1004 and S.J. Res. 11, which were crafted to hold the Trump administration back from "introducing armed hostilities to Venezuela." In this moment, reminding our elected representatives that we won't let history repeat itself in Latin America is vitally important.

Please let them know TODAY that as a constituent, you want them to take action to prevent yet another war waged by the U.S. for private gain and to end the devastating sanctions on Venezuela.