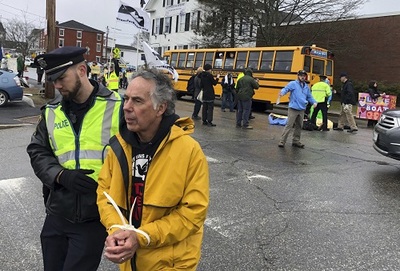 Over 75 Maine peace activists gathered under foggy, misty conditions at GD/BIW in Bath on April 27, 2019 to protest the "christening"[sic] of the LBJ Zumwalt class warship. Lining both sides of Route 209 near the King Street parking lot entrance, activists displayed their signs and artwork. Bath police were on hand to control the situation. As a Bo-Mar bus carrying viewers to the christening came down Route 209, activists took to the street and blocked the progress of the bus. Another small group of activists came around to the backside of the bus and prevented it from moving. At this point, Bath police appeared with plastic handcuffs and warned activists that they risked arrest if they continued to block the Bo-Mar bus. Some of the activists who blocked the bus on the backside elected to stay and be arrested. After this first group was arrested and the Bo-Mar bus was able to back up and enter the King Street parking lot, another group of activists who had been blocking the Bo-Mar bus in front moved to the King Street parking lot and blocked the entrance. Again, Bath police issued the arrest warning, and some activists elected to stay and get arrested, including an 88 year old woman. In all, 25 Maine peace activists were arrested during the well planned and executed peaceful protest.

Photos of Maine peace activists protesting the “christening” of the LBJ destroyer at GD/BIW in Bath on April 27, 2019